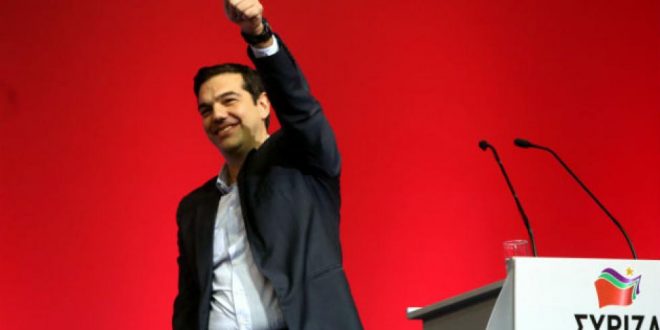 “Today we took a big step to bring hope back to our country,” president of Greece’s main opposition party, left-wing SYRIZA-Progressive Allianc, Alexis Tsipras, stressed late on Sunday after the closing of the ballot boxes for the elections of the party leaders and members of the Central Committee.

The former Prime Minister spoke of a “historic day” and a party that is “massive, popular, youthful, modern and radical,” adding that SYRIZA “will be the first party with a difference in the next elections.”

It should be noted, however,, that Tsipras was the only candidate on the ballot box

Alexis Tsipras had called on every young man and young woman who have experienced work insecurity, pensioners who saw their opportunities diminished, and professionals to “provide a strong message of political change, in order to push political developments and usher in the time for a different direction for Greece and our people.”

In recent months, he toured throughout the country addressing all those disappointed and ignored by the conservative New Democracy government, such as workers, new generation, farmers, lower middle class.

Especially due to the energy crisis and the galloping inflation, SYRIZA sees a “rapid deterioration of the government” and snap elections before summer 2023.

In recent public opinion polls, the difference between ND and SYR has dropped to one-digit numbers.

Scenarios speak of early elections in September and the main opposition estimated that much will depend on whether the tourism season will go well and there is not the same extend of last year’s catastrophic wildfires.

Tsipras’ massive confirmation in the leadership will allow him to form the new leading group of the party, according to his will.

According to party officials, the elections on Sunday sent also the clear message that 10 years after 2012, when the party recorded a big electoral rise due to the bailout agreements, SYRIZA-P.A. not only remains in the forefront as the progressive pole of the political system, but it is greatly strengthened with new members in crucial social classes.

Worth noting that in recent polls, Greeks have expressed the wish for a SYRIZA-PASOK/KINAL coalition government to emerge from the next elections, rather than a ND-PASOK/KINAL alliance.