June 26, 2022 FEATURED, Politics, Turkey-GR Comments Off on Erdogan to raise his claims about “sovereignty” of Greek islands at NATO Summit 1,101 Views

At the NATO Summit upcoming week, Turkish president Recep Tayipp Erdogan will raise the issue of “militarization” of Greek islands in the Aegean Sea and their “illegal occupation by Greece,” some Erdogan-affiliated media reported on Sunday oblviously following leaks by president’s aidees.

With the title “President Erdogan goes to NATO Summi: There are 6 titles in his bag,” newspaper Yeni Safak reported that among the issues Erfogan will bring to the agenda of the NATO Summit is “the illegal occupation of the Aegean islands by Greece” and their “militarization.”

Listing the “6 titles” or most likely “items” Yeni Safak reported that Erdogan will raise the following issues at the NATO summit: 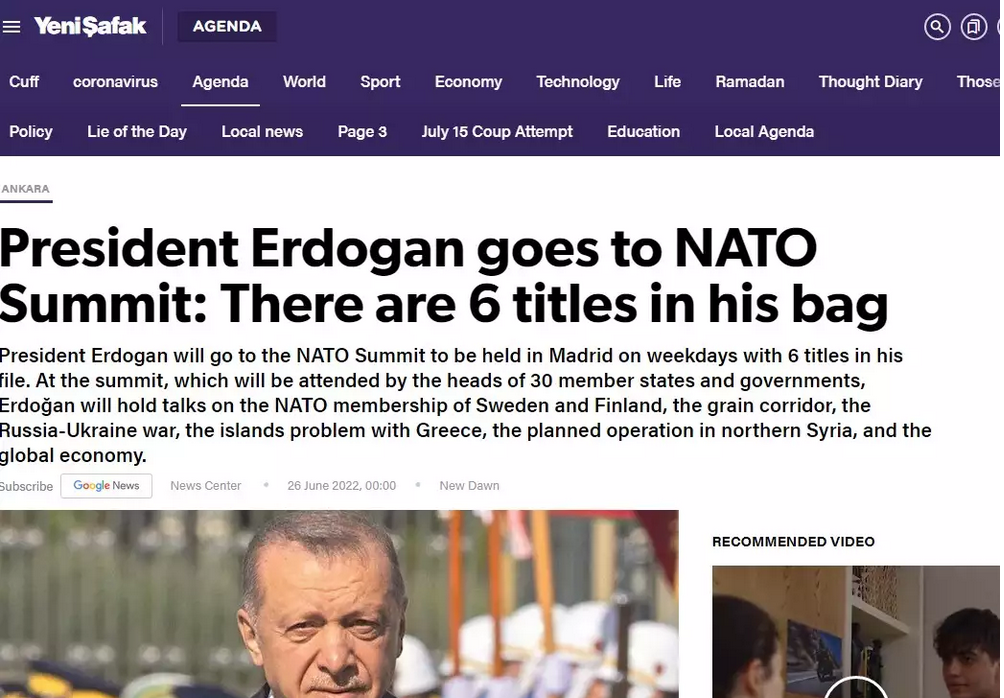 Erdogan’s alleged agenda at the NATO is apparently made public a few days after Deputy Prime Minister Fuat Oktay openly threatened with military intervention. He said that Athens should back down on the issue of militarization of the islands, otherwise there will be consequences like the Asia Minor disaster (1922) but also the recent one as in Cyprus [ where Turkey occupied the northern part of the island in 1974 and claiming jurisdictions since then.]:

Oktay insisted that “if the demilitarization of the islands in the Aegean is not done soon, we will challenge the sovereignty of the islands under international law and agreements.”

Just on Saturday, Foreign Minister Mevlut Cavusoglu claimed that “Turkey cannot be contained within its borders.”

#Turkey cannot be contained within its borders.
If this doesn’t ring a bell, it should definitely sound an alarm.pic.twitter.com/Zy42vzBlWG

Turkey has escalates its aggressive rhetoric against Greece in recent weeks and its threats to “challenge Greek sovereignty over the islands” of the eastern Aegean Sea, seems to be top on Ankara’s agenda, something like it’s now or never.

What will Turkey achieve if it bring its claim at the NATO Summit? Technically nothing, and the Alliance to which both Turkey and Greece are members, can not take any decisions on such an issue.

At political level, there may be some EU partners of Greece to tell Turkey to “shut the f*ck  up!” But Greece’s diplomats and high-ranking officials have to work hard in advance to achieve such support.

What can Turkey do next? Bring the issue at the United Nations. In both cases, Turkey will have to solid prove its claims, and this can never be achieved based on the Treaties of Lausanne (1923) and Paris (1948) and given the fact that Ankara has an official casus belli (reason for war) against its neighbor in the West as well as its strongest army flank stationed along its western coast..