Thousands of hectares burned in Dadia Natural Park, on Lesvos

July 25, 2022 environment Comments Off on Thousands of hectares burned in Dadia Natural Park, on Lesvos 482 Views

Over 2,528 hectares have been burnt in the Dadia National Park in North-Eastern Greece following a fire raging since July 21, according to maps of Greece’s National Observatory of Forest Fires (NOFFi) released on Monday.

NOFFi, which provides a semi-automatic burned area mapping service (NOFFi-OBAM), also said that over 1,709 hectares had been burnt in Vatera on the island of Lesvos. 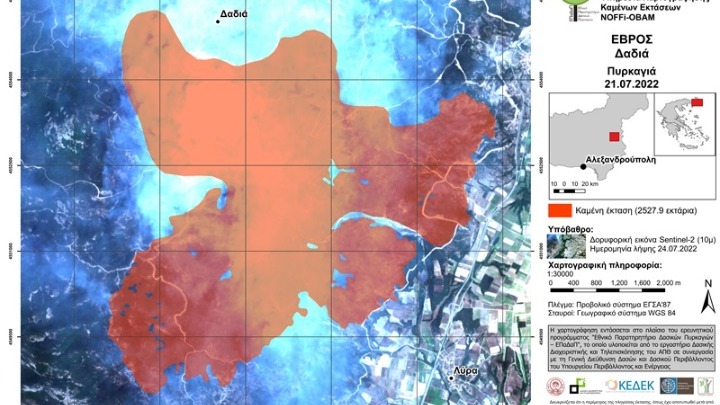 An assessment of the fire on Penteli mountain near Athens will be provided later, with preliminary figures hinting at a destruction of 2,430 hectares.

The maps provided to state-run news agency amna are based on preliminary analysis of satellite images, expected to be updated with images from satellite Sentinel-2 when the fires have been extinguished. They will be used by agencies, ministries, the Aristotelian University of Thessaloniki, and the Interbalkan Environmental Center (working with the EU and UN agencies) in plans for restoration of the forestland.

Professor of Forestry and Natural Environment Ioannis Gitas, who is also director of the University of Thessaloniki’s Laboratory of Forest Management and Remote-Sensing, told amna that there were more fires in Greece this July compared to 2021, while the heatwaves have also occurred earlier than last year.

Data used in the maps is available at the link http://fmrsvm.for.auth.gr/.