In a safety bulletin released on July 28, 2022, the European safety regulator said that debris of the large space rocket Long March 5B (CZ-5B) might affect the European airspace between July 30 and July 31, 2022.

Space Surveillance and Tracking (SST) experts issued a recommendation for the relevant countries’ aviation authorities and airlines to “regularly monitor” and to “take into consideration the latest predictions for the re-entry and adapt their risk assessments in accordance with the evolving situation and information available,” the EASA wrote. 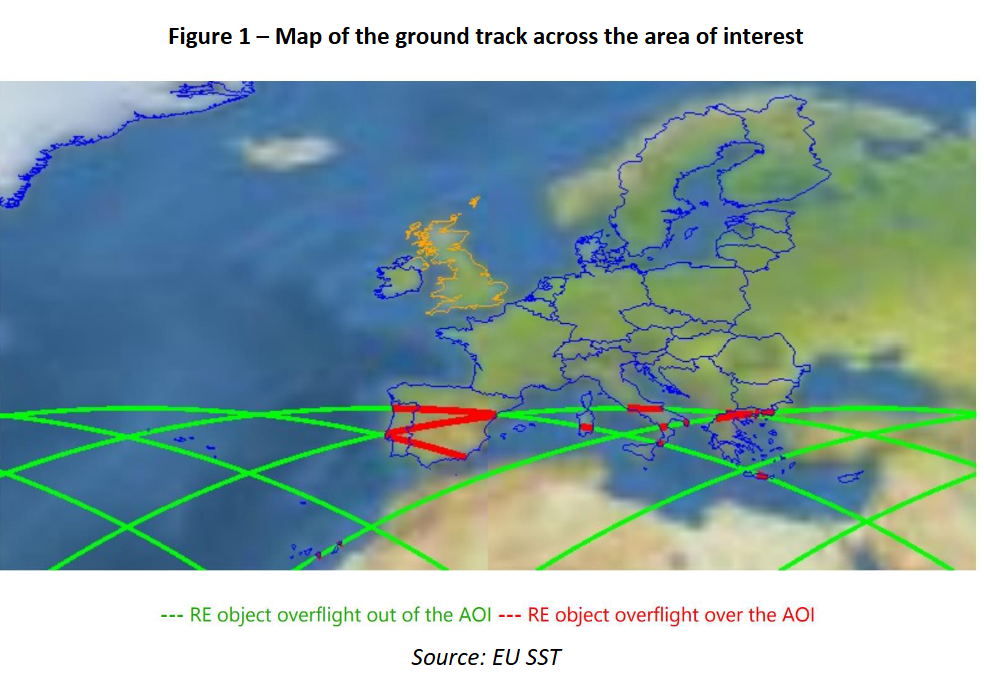 Early estimates gave a range extending from the Atlantic Ocean to the Pacific Ocean. But according to the European Union Aviation Safety Agency (EASA), it seems that the debris is expected to fall in an area that stretches from the Azores to the Atlantic and extends to Greece.

In Greece areas at risk where the debris may land are Northern Greece and Crete on Sunday, July 31, 2022. However, it is not yet considered certain if they will fall in any of the above countries, as the extent of the impact covers a huge part of the sea, as a result of which pieces may land in the water.

“Object CZ-5B has an estimated mass ranging between 17 and 22 tons, which makes it one of the largest pieces of debris re-entering the atmosphere in recent years,” the agency explained. “For this reason, it deserves careful monitoring.”  EASA noted.

The EASA recommended that the concerned authorities adapt the risk assessments in line with the situation and updates provided as well as and consider the implementation of airspace restrictions on “a 200 km-wide path around each of the re-entry passes as forecasted by the EU SST at the foreseen times.”

Developed by the China Academy of Launch Vehicle Technology (CALT), the Long March CZ-5B is a heavy-lift vehicle designed to use exclusively non-hypergolic liquid propellants and dedicated to flying necessary modules to the Chinese space station.

The rocket was sent to its most recent space mission on July 24, 2022.

Uncontrolled re-entry of Long March 5B

The probability of it landing in any populated area is extremely low, experts say.

The latest launch was on Sunday, when a Long March 5 rocket carried a lab module to the Tiangong station. The Chinese government said on Wednesday that the rocket’s re-entry would pose little risk to anyone on the ground because it would most likely land in the sea.

“However, there is the possibility for pieces of the rocket to come down over a populated area, as they did in May 2020 when properties in Ivory Coast were damaged,” noted the BBC.

The empty rocket body is now in an elliptical orbit around Earth where it is being dragged toward an uncontrolled re-entry.

“It’s a 20-tonne metal object. Although it will break up as it enters the atmosphere, numerous pieces — some of them quite large — will reach the surface,” said Michael Byers, a professor at the University of British Columbia and author of a recent study on the risk of casualties from space debris.

Space debris poses an extremely minimal risk to humans, Byers explained, but it’s possible that larger parts could cause damage if it lands in inhabited regions. Byers said that due to the increase in space junk, those small chances are becoming more likely.

Holger Krag, the head of the European Space Agency’s Space Debris Office, told also CNN that international best practice was to conduct a controlled reentry, targeting a remote part of the ocean, whenever the casualty risk is too high.

He added that the re-entry zone for the rocket was geographically limited to between the latitudes of 41 degrees south and 41 degrees north of the equator.

According to The Aerospace Corporation, a non-profit organist based in California, re-entry will occur around 00:24 GMT on Sunday, plus or minus 16 hours.

Our latest prediction for #CZ5B rocket body reentry is:
🚀 31 Jul 2022 07:34 UTC ± 22 hours
Reentry will be along one of the ground tracks shown here. It is still too early to determine a meaningful debris footprint. Follow this page for updates:  https://t.co/SxrMtcJnj0 pic.twitter.com/MwWiF85iPI

Our latest prediction for #CZ5B rocket body reentry is:
🚀30 Jul 2022 18:05 UTC ± 5 hours
Reentry will be along one of the ground tracks shown here. It is still too early to determine a meaningful debris footprint. Follow this page for updates:  https://t.co/SxrMtcrMrs pic.twitter.com/hOsvq5wmWl