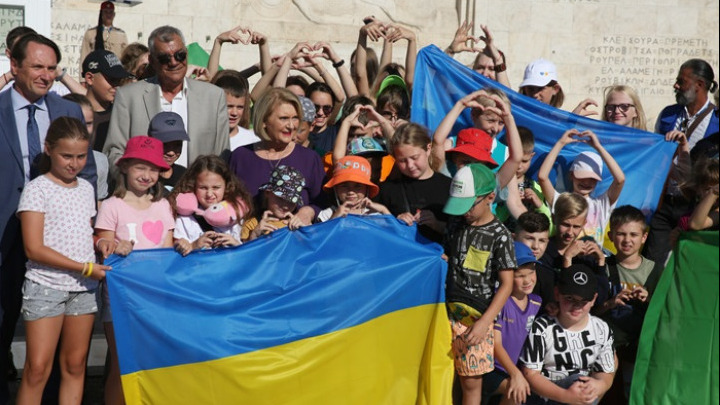 The first 117 of 600 Ukrainian children aged 6-15 that will be hosted in Greek summer camps arrived in Athens and Thessaloniki on Friday.

Greece’s union of privately held camps (Panhellenic Union of Private Initiative Camp Operators) offered to host the children, all of which left Bucha and arrived in the two cities by coaches escorted by the Greek police.

In Athens, the children and the 22 adults escorting them were welcomed at Syntagma Square by Deputy Migration & Asylum Minister Sofia Voultepsi and Ukraine’s Ambassador to Greece Sergii Shutenko. Those who arrived in Thessaloniki and will be housed in summer camps in Chalkidiki were welcomed by Deputy Interior Minister for Macedonia Thrace Stavros Kalafatis.

“It is not within our power to end the war, or to erase from children’s souls the trauma left by the loss, the destruction, and the violence of the war,” Voultepsi said on their arrival. “What we can offer is a few moments of being joyful and carefree, to insert a positive memory into such harsh images.”

The Ukrainian ambassador emphasized that “it is impossible to understand what these children have experienced, as they faced the brutality of the Russian occupation forces in the first weeks of the Russian war.”

Two more groups of children will follow on August 12 and 17.