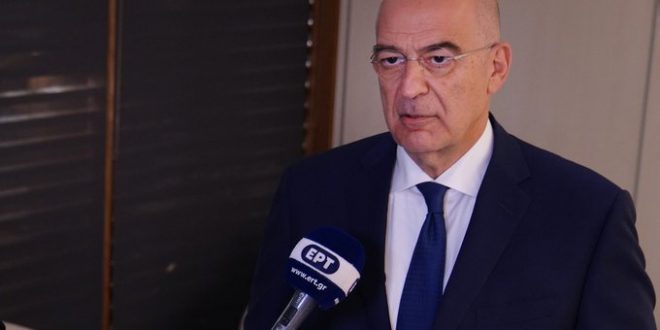 Greek Foreign Minister Nikos Dendias said Monday that he is “fully satisfied” by the Prime Minister’s pledge to shed light on the wiretapping scandal, after two   newspapers alleged he was among those targeted via phone malware.

“I would also like to say that my cooperation with the Prime Minister is continuous and characterized by mutual trust. After all, it has produced tangible results in the field of foreign policy in the most difficult period,” the minister said as he arrived in Brussels for the EU’s Foreign Affairs Council meeting that will discuss Ukraine, the Western Balkans and Africa.

“Beyond that, I am completely satisfied by the Prime Minister’s assurance that light will be shed [on the matter],” Dendias reportedly added.

Left-wing Documento newspaper on November 6 and center-right To Vima on November 13 reported that the foreign minister was among over 30 people,  including ministers, business people and a former New Democracy prime minister, had been under state surveillance via phone malware. The phones were allegedly infected with the Predator.

A week after Sunday newspaper Documento alleged that Foreign Minister Nikos Dendias was one of the targets of surveillance, now also Sunday newspaper To Vima talked about the monitoring of Greece’s top diplomat.

“The monitoring of Dendias and how the “data” reached the office of PM” is the characteristic report title of VIMA.

The newspaper noted that the Predator was initially activated at EYP facilities in Agia Paraskevi, with a reported briefing from the nephew of Kyriakos Mitsotakis and former secretary to the Prime Minister, Grigoris Dimitriadis.

To Vima wrote among others that “there began to be a cycle of negotiations on the use of the Predator outside of national security issues. Of interest mainly to ND ministers who do not seem to have had good relations with the “paracenter” in question. With much of the surveillance data reaching the Maximos Palace, not many people know how this special information is produced, mainly from within the government faction.”

And the newspaper continues: “It is indicative that among those monitored was the Minister of Foreign Affairs, Nikos Dendias – with the phone intercepted a year ago – through a suspicious SMS”.

According to the newspaper, the monitoring of the foreign minister has caused disturbance in many diplomatic missions and secret services of foreign countries from Europe, America, the Middle East, etc.

“And this is because Mr. Dendias had a series of contacts with important foreign politicians and diplomats and the said malware that appears to have been sent to his cellphone could also record their important secret conversations in their meeting space. According to some journalistic sources, already foreign agencies seem to have launched an investigation into the senders of the Predator on Mr. Dendias’ mobile phone and beyond,” To Vima stressed.

When Documento published the list on November 6, sources close to the FM did not deny the monitoring.

Nikos Dendias is one of the strongest candidates to challenge Mitsotakis for the leadership of New Democracy, once the failures of the conservative government are too big to hide.

However, it looks as if the race still needs essential negotiations among the several fronts in the party, as it remains unclear when the next elections will take place.

According to media reports, several ND members urge for early elections in upcoming January, before the damage from the wiretapping scandal is too big to deal with and voters have not gone through the full winter without heating yet.

In a recent PRORATA public survey, 80% of the respondents said they believed the PM knew about the wiretapping. A view shared also by 56% of ND voters/respondents. 50% of respondents said also that the PM should claim political responsibility and resign.

The PM has repeatedly said that elections will take place at the end of the legislative period, that is something in late spring, early summer 2023.

Several media that were supporting the conservative government in the last couple of years have recently urged Kyriakos Mitsorakis to take political responsibility.

PM Mitsotakis has often told media that he was not aware of the wiretapping.