The wave of Indignants appears to be spreading increasingly and the virus of  “Speak Up”-disease infects more and more people and social classes. The voices of those seeking changes in the deadlocked political system are getting louder. No, no, there not demands about ‘anarchistic revolts, “overturning the order” and other scary political concepts, as some circles here are trying to imply in order to undermine the general outcry. People demand other changes, democratic changes, structural changes of a system that many Greeks consider as “disdained” and “obsolete” and “in process of total decay”.

“Responsibility”, “Cleaning” “Punishment”, “Democratic procedures” are the slogans that shake Greece these days. To the rows of low pensioners, students,  jobless, employees,  impoverished  and  middle classes protesting daily in front of the Parliament, come more and more academics and intellectuals. They raise their voices and even manage to break long standing Greek systemic taboos: To slip near the microphones of the mainstream media and draw attention to the government that the political system is collapsing and needs urgently structural reforms. That the deep crisis Greece is experiencing is not only economic, but also political and cultural.

On the opposite side, on the side of the government and its supportive media, reactions to the indignant movement came with heavy heart and only after the mass protests swelled in numbers that could not be ignored. Their reactions is rather ‘patronizing’ with commentators and some politicians describing the movement as “sympathetic”. Deputy PM went even so far to speak of a “fashion wave of new technologies”.

I even heard of a government minister, saying that ‘the mass protests are been tolerated as a means of release frustrated public sentiment, a valve to diffuse pressure”. And that soon protesters will return to their couches…

As the movement consists of the whole mosaic tiny stones of the Greek society that’s a small possibility too. However, if political forces, especially those in power, do not listen to the challenges of the current times, I dare to assume that they will be soon lose the last pieces of dignity they might still have in the eyes of citizens, i.e. their voters.

Trying to degradate a public outcry, trying to level the needs for charge, trying downgrade mass protests shows only a high level of arrogance. And it verifies  what many common people say: that the government has lost all contact to the society.

I entitled the article “Winds of Change”. But so far the changes refer only to the needs of citizens for it. Hopefully politicians won’t ignore them and turn a deaf ear to this historic momentum. 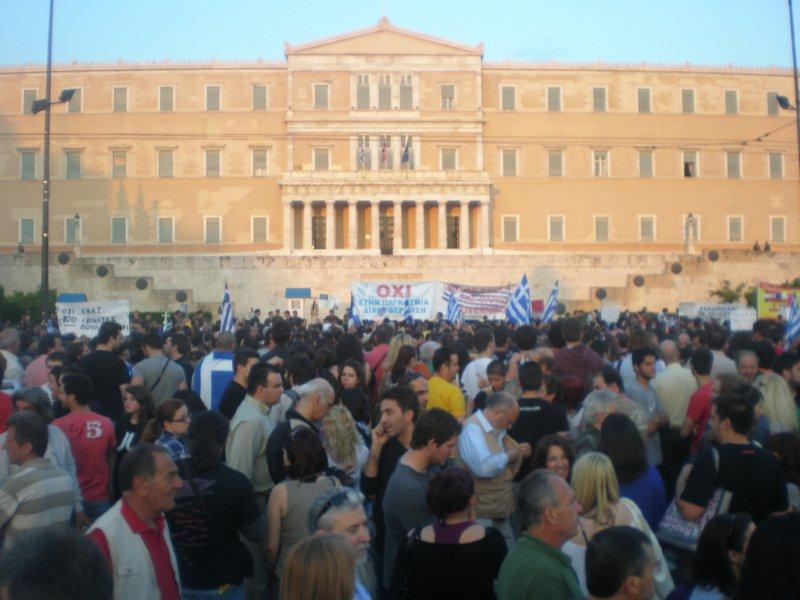