British Channel 4 launches today a reality show with the fantasy-full title “Go Greek for a Week”, ie. “Be Greek for a Week”. Three British Families are invited to describe their imaginative “Greek reality” under the prism of the real “British” life and culture.  Along with the personal experiences of  the three families, experts will argue for tax evasion, corruption and mismanagement in Greece, which helped to sink our economy.

The participants are a surgeon, a hair dresser and a bus driver.

Three British families try out the tax, pensions and work practices that caused Greece’s economic crisis and brought on the austerity measures aimed at cutting the deficit and qualifying for EU bailouts.

A 54-year-old British hairdresser discovers the generosity of the Greek pensions system, which still allows hairdressers, pastry chefs, radio continuity announcers and people in almost 600 other jobs to retire aged 53 at 90% of their final salary because their jobs are defined as hazardous.

A bus driver reaps the rewards of the Greek approach to state-run services, where bus drivers could be paid up to almost double the national average salary and receive extra bonuses for arriving at work early and for checking bus tickets.

And a British surgeon is delighted to discover how paying income tax the Greek way will transform his disposable income.

The personal experiences of the three main characters are supported by expert interviews that establish the patterns of tax evasion, corruption and mismanagement that have helped to sink the Greek economy.

The description doesn’t say whether the participants will have a moustache, wear a traditional skirt or an ancient toga and dance Syrtaki all day long. Further, it hasn’t be clear whether the winner award will be a bottle Ouzo,  a kilo of olives and/or a frenzy O-PAAA!

Hoping the show will continue will be more equal realistic titles like “Being a UK working class hero for a year” and “Being a Zimbabwean for 46 years after British Empire”. 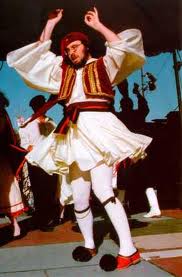