Crews from Greek search and rescue brigades (EMAK) rescued a little dog from the slopes of the Isthmus of Corinth. The dog had left his home a few hours earlier. He was trapped in the slopes and was unable to return to safe land. The onwers called the fire brigades that immediately sent a rescue crew.

The little dog looked scared. He was trapped in a 50-meter long path.  At a dangerous area where no human would be able to reach by foot. The desperate owners were watching every move of the rescue team efforts to give a happy end to the dog’s drama. 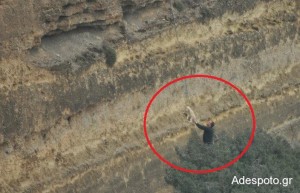 After the rescue was successful completed the exhausted dog was returned to the arms of the relieved owners who burst into tears.

The footage was filmed by Korinthos TV , pictures from adespoto.gr

Ps after this awful adventure the dog will think twice before he leaves the home yeard again….