A riot policeman hit Greek journalist Rena Maniou from private Antenna TV and threw her on the sidewalk where she hit her head. Maniou was taken to the emergency of a nearby hospital. Also journalists from state broadcaster NET and newspaper reporter Dionysis Vythoulkas (To Vima)  were violently pushed away by the riot police with the effect that they fell on the sidewalk. 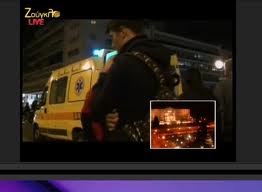 A video on Greek internet shows reporter Maniou laying on the ground, unable to move or stand up while waiting for the ambulance. 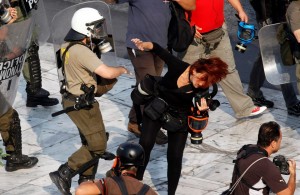 On Thursday morning Greek Police EL.AS. issued a statement saying that police will launch an internal investigation into the alleged attack on Maniou.

The attacks against journalists occurred Wednesday night during a spontaneous protest outside the Parliament to commemorate retired pharmacist Dimitris Christoulas, 77,  who had committed suicide at Syntagma Square earlier in the morning.

Giorgos Gerafentis, one of the state broadcaster journalists, told NET TV this morning, that the riot police had rough-handled the media trying to cover the protest and the following incidents between some protesters and riot police squads.

“I identified myself as a journalist but riot police shoved me away nonetheless,» Gerafentis said adding “I fell from the sidewalk onto the street, but luckily I was not hurt.»

The incidents started short before 8 pm when some protesters started to hurl stones against the police squads. Tear gas was fired and the tension was diffused. An hour later tension rose again, with protesters hurling molotov cocktail bombs and stones.

There are reports that police fired tear gas also inside the metro station.

At least 1o protesters were detained.