Greek National Weather Forecast EMY announced extreme weather conditions with heavy rain and even storms in western, central and northern parts of the country. In Athens, the sun has long ago  disappeared behind clouds bearings billions of water drops. Far outside, at the horizon the dark blue sea joined the grey no-good-omen bring sky. Temperature dropped to levels unusual for the season. My cat sought shelter from the upcoming catastrophe in the darkest corner of the wardrobe, She even open a suitcase and pushed out my favorite winter pullover.

Weather experts are puzzled about the sudden weather deterioration that came less than 24-hours after debt-ridden Greeks spent Sunday at the beach enjoying swimming and outdoor sports like the nerving Click-Clack of rackets.

On Monday afternoon, short before the skies open and pour over our heads, simple men and women get on their knees and make the cross sign. 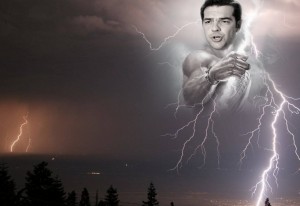 However a scenario of apparently logical and alleged scientifically proven explanation makes the round son Greek internet: That left-wing SYRIZA leader, Alexis Tsipras, was to blame for the extreme May weather conditions. For refusing to join the coalition government talks.

Tsipras’ wanna-be coalition partners Samaras (ND), Venizelos (PASOK) and Kouvelis (Democratic Left) threaten that Tsipras governance plans will push the country out of the euro. At the same time, they urge him to join a coalition government with them, while they accuse him for solely bearing the responsibility for the upcoming collapse (euro exit, rain, storms) of the modern Greek world.

Tsipras urges them to proceed to a 3-party coalition as they have a 168-seats majority in the parliament. Why don’t they do it?

I fail to see any logic here…

PS Seriously talking: rain is indeed expected today and tomorrow but we will not sink, fall apart and collapse due to weather…