Greece is speechless! Totally out of control  spokesman of Chrysis Avgi (Golden Dawn) and elected MP Ilias Kasidiaris punched Communist KKE MP Liana Kanelli while on live studio on ANT1 TV on Thursday morning. Just seconds earlier Kasidiaris had thrown water against SYRIZA MP Rena Dourou. The prosecutor asked the arrest of Golden Dawn MP for “dangerous physical damage”, while he is on the run.

In this unprecedented incident of violence outbreak by a member of the Greek Parliament, a panel of representatives of several parties was invited at the morning programme of Giorgos Papadakis. The tone of the debate was already high when it went out of control.

Kasidiaris and Kanelli had already exchanged their views in “French” with Kasidiaris calling her in a scorning way “old communist” (παλιοκομμούνι) and she calling him “German-collaborator” (Γερμανο-τσολιας= a description for collaborators during WWII occupation) and “fascist” (φασισταριό).

When Dourou intervened and mentioned the running trial against Kasidiaris, who got outraged. When Dourou said “Your party will take Greece 500 years back”, Kasidiaris grabbed the glass of water standinig in front of him emptying it at Dourou.

Kanelli jumped up telling him “Get out of here, asshole!”. Kasidiaris stood up and started punching Kanelli with his fists while presenter Papadakis intervened shouting “No! No!”

According to Greek media, while Kasidiaris was leaving the studio he allegedly beat also the programme editor in chief.

The incident occurred a couple of minutes before 10 am. Half an hour earlier the Athens prosecutor had ordered ex officio the arrest of Kasidiaris.

As of 11:01 am the whereabouts of Kasidiaris are not known. ANT1 reports that the police is searching for his red car and has already surrounded his home.

Kasidiaris was elected as MP at May 6 elections. However as the Parliament opened for only two days and new elections are under way he is not protected by ‘deputy immunity’. His current status is just “candidate”.  The arrest warrant is for charges of “dangerous physical damage”.

Ilias Kasidiaris in currently on trial with the offence of ‘collaboration in robbery’.

With the exception of Golden Dawn, all political parties condemned the assault, with SYRIZA, Independent Greeks and PASOK asaying that they won’t participate in debates where members of GD are present.

Pavlopoulos (ND). who was present at the incident. told Skai TV that the Radio&Television Council should issue a media ban for all GD representatives.

– Journalist Delatolas who was also present and stood up to get Kasidiaris under control, told Real FM that Kasidiaris threatened leaving studio, that he’ll be back with more of his kind… 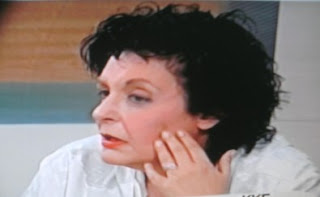 – Journalists and technicians of  ANT1 TV managed to confine Kasidiaris to a room but he broke the door and escaped.

-Liana Kanelli stated that she would not sue him “because such an issue cannot be solved with a complaint. His mother should be proud of him.”

– Unconfirmed report :  Ilias Kasidiaris claims that “Kanelli attacked him first, he was in self-defense” and that he would “sue her”.

According to Proto Thema, GD leader Nikos Michaloliakos claimed that Kasidiaris was provoked by Kanelli because she threw the papers at him first. Michaloliakos said, “people should carefully watch the video”.

–PASOK described GD as ‘neo-nazis“, “cowards” and “thugs” and called those who voted for GD on May 6 to reconsider.

– Dangerous polarisation of the Greek society: Greeks are divided on the incident – While many condemn the GD violence outbreak, others express their understanding…

-Chrysi Avgi backs Kasidiaris in a statement saying “Kanelli hit him first” and declares a media embargo to all tv stations and newspapers in order to “undelrine our isolation.”

UPDATES: 7 p.m.
– Kasidiaris is still on the run and is most probably hidding, while police and prosecutor are searching him. Some Greek media claim that he would most probably remain on the run until Saturday morning in order to avoid being arrested due to “48 hours period of cuaght in act of committing an offence”.

-SYRIZA MP Rena Dourou is apparently going to file a complaint against Kasidiaris. Kanelli has said that she would refrain from legal measures.

– Giorgos Delatolas who was present at the incident said while at Skai TV on Thursday afternoon, that Kasidiaris also hit the programme presenter Papadakis and that he broke the studio door.

Kasidiaris’ Facebook pae has been reported to be taken down due to insulting comments posted by his friends.

-The Greek society is still in shock seeing someone who claims to represent his voters at the Greek parliament to punch with four kick-boxing right-left blows a woman who could be his mother.

At May 6 elections, 14,000 Greek voters marked a cross at the name of Kasidiaris on the Chrysi Avgi ballot paper.