When Politicians Scared of Citizens, Grannies Go to Church “Invite-Only”

The unprecedented security measures in Thessaloniki angered the believers who wanted to attend the festive mass at the church of Agios Dimitrios, the patron saint of the the city. Greek police had isolated the area around the church up to 150 meters away from the building. A ‘dead zone’. Entrance was permitted only with special invitations.

Some believers were able to attend the mass, pray and light a candle only with personal invitations they had acquired days ago from the local authorities. Even journalists had to get these special invitations.

The draconian security measures were taken because President Karolos Papoulias and Prime Minister Antonis Samaras have been visiting the city in Northern Greece in order to attend the three days festivities: The celebration of patron saint Agios Dimitrios and the National Oxi-Day. 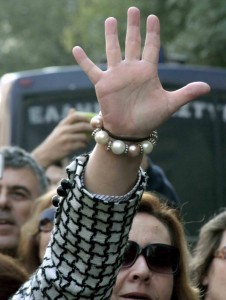 A proud and stylish middle-class Moutza* !

“Collaborators, go home!”, “We don’t want you here!” were some of the slogans.

Even with an invitation those lucky believers had to be checked by the police before entering the church.

“I promise you that in a couple of years Greece will be much better if we stay united and determined.”

Until the” better Greece” emerges on the horizon, politicians will have to be guarded by thousands of policemen if they want to make a public appearance, it seems.

*A moutza  is the most traditional gesture of insult among Greeks which consists of extending all fingers of one or both hands and presenting the palm or palms towards the to-be-insulted person in a forward motion. It is often coupled with the expletives “να” (na), “παρ’τα” (par’ta) or “όρσε” (órse), meaning “here”, “take these” and “there you go”, respectively.

NATO has indefinitely postponed talks with  Finland and Sweden at Turkey’s request. The talks were …