Merkel’s Envoy Fuchtel in Greece: How He Sings and Laughs…

I can’t help myself  but I think, the man is inspiring. Probably my motive is different from that of his wife or the politicians of German Christian Democrats CDU of Chancellor Angela Merkel who has appointed Hans Joachim Fuchtel as deputy Labour Minister.

“H-J Fuchtel enjoyed octapus and dorade at a dinner organized by the German-Greek Assembly. He didn’t drink tsipouro, though. He loves the Greek cuisine. As he admits, his wife complains every time he returns from Greece with some more kilos.” (enikos)

Hans Joachim Fuchtel, a known man among the local politicians of the federal state of Baden-Wurttemberg. A man with connections to Abu Dhabi who once managed the impossible: to organize a camel race for ex Chancellor Helmut Kohl. In Berlin.

Hans Joachim Fuchtel: A hardly known man among Greeks. Until yesterday. When he insulted Greek municipality workers claiming ‘3,000 Greek workers do the job carried out by 1,000 Germans’. 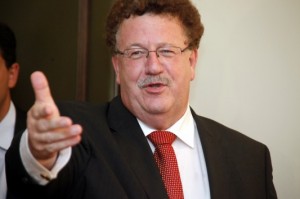 For your eyes only….

Today, the name of “Fuchtel” is in all Greeks’ mouth. Even though the name is a tongue-twister for the locals here.

Fuchtel, the bon viveur: Merkel called him “Fouchtelos”, he loves Greek food and wine and he ate bougatsa pastry in Thessaloniki – before the chaos…

H-J Fuchtel made the headlines. Nevertheless due to the ugly incidents this morning in Thessaloniki, when angry municipality workers harassed and abused the German Consul in the city of Northern Greece.

Municipality workers are primarily angry about the labour reserve that will send them home with 75% of their salary and the option of dismissal. Whether they angry or not, as of the end of the month, even if they keep going to work, some of them will probably see 25% less in their pockets.

Fuchtel as he sings and laughs: inside  Exhibition Centre, outside municipality workers protest

Fuchtel, the Greek I: “The reactions are instigated…”

And there comes a Fuchtel from Germany and tells them, he support they’d laid-off? The angry crowd attacks anyone who has the same nationality as Fuchtel. In this case, a diplomat, who didn’t happen to have any body guards to protect him from the outraged mob.

Fuchtel, the Greek II: “I am pro-Greek than ever before.”

It’s obvious the attack had the wrong target. But experienced Fuchtel knows all tricks of political  survival. He successfully managed to cover his back and enter the Exhibition Centre without any harm.

The hurled eggs, coffees and water bottles, the spoken insults were rather addressing Fuchtel. Too bad, the German Consul was in more vulnerable position.

After the incredible incidents, Hans Joachim Fuchter made a corrective statement.

” I have met many working state employees in Greece,” he said.

Too little, too late.

And too bad, for the Greek-German relations, for himself. Even though I hardly believe, he would be concerned about what Greeks think about him.

In Berlin, Angela Merkel commented that “Violence cannot be a mean of dispute”.

Neither arrogance or challenge of a society hanging on a very thin thread of cohesion.

BTW: If he is going some serious job here, he should rather speak about what exactly he is doing, progress or failures and refrain from cheerful Black Forest-style details of minor interest for the taxpayers who come up for his happy life expenses here. I assume, it is the German taxpayers, right? Or the Greeks?

Hand on pocket: Who pays for Fuchtel’s travel, accommodation and taverna in Greece?