Insane EU: Bank depositors in panic as they pay for Cyprus €10bn bailout

Bank depositors will have to finance 60% of  the 10-billion-euro bailout for Cyprus agreed between European Union and International Monetary Fund in Brussels in the early morning hours of Saturday. Eurozone ministers force depositors at Cypriot banks to pay a one time levy to raise  6 billion euros. The so-called “emergency solidarity contribution” will force savers to see their bank deposits undergo a 6.7%-9% “haircut”,  while bondholders will not suffer any losses at all.

There is no minimum deposit capital cap.

The decision will not affect bank deposits in Cypriot banks in the Greek bank network (Cuprus state RIK TV).

Tax on bank deposits interest is expected to be 20-25%.

The bailout is needed to recapitalise Cypriot banks, without it Cyprus would  most likely default.

Changes will have to be ratified by the House of Representatives, the Cypriot parliament within the weekend, while an emergency cabinet meeting is taking place on Saturday morning in Nicosia to assess the
situation. 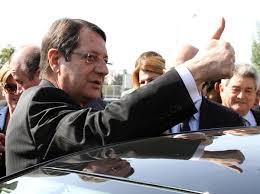 The decision bears the high risk of a bank run with depositors most likely to rush and withdraw their money to avoid the levy. The decision will come into force on Tuesday, after a bank holiday on Monday.

According to media reports, Cyprus blocked the electronic money transfers as soon as the decision was taken.

Hit by this decision are not only Cypriots but also Greeks who had transferred their money to Cypriot banks during the crisis, Russians and Brits.

Dozens of people formed long queues outside credit societies on Saturday morning as Cypriots rushed to withdraw their money. The General Director of co-op credit societies  told media that “the system was frozen” and announced the closure these money institutes over the weekend.

Co-op credit societies, normally open on Saturdays, were shut for business in the coastal town of Larnaca as depositors started queuing early in the morning to withdraw their cash.

“I’m extremely angry. I worked years and years to get it together and now I am losing it on the say-so of the Dutch and the Germans,” said British-Cypriot Andy Georgiou, 54, who returned to Cyprus in mid-2012 with his savings.

“They call Sicily the island of the mafia. It’s not Sicily, it’s Cyprus. This is theft, pure and simple,” said a pensioner. (full story & Brussels background Reuters)

As the panicked bank depositors tried to find alternative solutions and rushed to ATMs, those were soon “out of order” as they dried out of cash.

Unconfirmed information claim that the bank withdrawal system was holding back a percentage for the levy.

Speaking to state TV RIK, Cypriots complained that they were caught “asleep” as rumors and leakages to the press before the bailout agreement were claiming that bank deposits below 100,000 would be not touched.

Cyprus becomes the fourth country after Greece, Ireland and Portugal to turn to the euro zone for financial help in the wake of the region’s debt crisis.

This is a radical, unprecedented and immoral departure from all previous aid packages mechanisms, where citizens will have to pay twice for their own bailout. And almost equally: the one with 100,000 euro deposits and the one with 10,000 or even 100 euro.

By blocking all the money transfer and withdrawal systems, the EU finance ministers topple any democratic procedures of the same European Union by prohibiting “free move of goods and money”.

Additionally, the decision cancels the EU protection of bank deposits up to 100,000 euro.