European Commission President Jean-Claude Juncker and EU Commissioner for Economic and Financial Affairs Pierre Moscovici signaled that they want to scrap the Troika, the representatives of International Monetary Fund, The European Union and the European Central Bank, dealing with the Greek bailout programs, the austerity time table and the so-called “reforms”. But even Germany does not seem negative to the idea.

The first signal came in fact by Moscovici on Friday, but it went broadly unnoticed by international mainstream media due to the crucial meeting of Eurogroup head Jeroen Dijsselbloem with Greek Finance Minister in Athens, a meeting that ended in a rift.

SYRIZA MEP and Vice-President of the European Parliament, Dimitris Papadimoulis had submitted a relevant query to Moscovici, before Yanis Varoufakis officially stated on Friday that Greece “will not cooperate with the Troika.”

Papadimoulis had raised the issue of the operation of the troika and the initiatives of the new European Commission, regarding the replacement of the troika model in countries subject to Macroeconomic Adjustment Programmes. In his response Moscovici left the possibility of replacing the troika with a more democratically legitimate and more accountable structure open.

Moscovici in his response noted that the democratic accountability of the crisis resolution strategy is truly of fundamental importance and stressed that all the MOUs as part of the macroeconomic adjustment programme were signed by democratically elected national governments.

He added that the Commission would examine the role of the so-called troika, including the possibility of its replacement over time with a structure that has greater democratic legitimacy and accountability, will be based on the European institutions and will be subject to greater parliamentary control on a European and national level.

He concluded by saying that since the change of the existing structure involves the examining of complex institutional, legal and fiscal issues, the proposals should be discussed and agreed by member-states (AthensNewsAgency via here; Full question & answer in Papadimoulis blog here, in Greek, uploaded Jan 30/2015)

“We have to find an alternative quickly,” the sources said.

Of course, such a move cannot be done without a German blessing and without proper German terms & conditions.

However, this would only be possible if Greece accepted the need to stick to previously agreed reform and savings targets, the business newspaper said.” (Reuters, Handelsblatt German here)

Greece wants to “negotiate separately with the European Commission, the IMF and the European Central Bank but not with officials representing all three”, Varoufakis said explicitly Sunday in Paris, for those (like Dijsselbloem) still unable to understand the Greek concept. 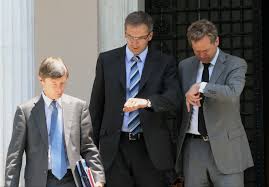 Later on Monday, Merkel’s spokeswoman Christiane Wirtz dismissed suggestions in Handelsblatt on that also Berlin had signaled scrapping the Troika.

“The German government sees no reason to scrap this mechanism of evaluation by the troika, then political decisions made on the basis of the troika’s findings — and we also see no indications that the EU is distancing itself from this evaluative process,” Wirtz said.