There is no cure for the Greek – German relations with insults and unacceptable descriptions to land into the minefields of both sides. There seems to be no sight of the verbal crisis diffusion, unless, German Finance Minister Wolfgang Schaeuble goes home and devotes himself to his rose garden. His hostile attitude and obsessed behavior towards Greece’s new government in general and Greek Finance Minister Yanis Varoufakis in particular has gone out of control, violating any rules of diplomacy and etiquette. In the latest episode of the Greek – German drama, Schaeuble -in his own words – told his Greek counterpart right in the face that he was “foolishly naive” and prompted angry reactions from Athens. But Greece stroke back with the renewing the WWII reparations form Germany and even threatened to confiscate German state property.

During the last 24 hours, the rhetoric between the two countries has really turned  nasty.

After the ECOFIN meeting on Tuesday, Wolfgang Schaeuble felt the inner pressing need to provoke Greeks by mentioning the No-No word “Troika” – four times in total.

“German Finance Minister Wolfgang Schäuble seems to fight out a kind of private feud against the Greeks. So he mentioned yesterday several times, the bad, forbidden, scandalous, libelous word for every Greek: the word “troika” (ouch!). There are words that are so indecent that they may never spoken out – but Schäuble used the word yesterday at least four times. To the strong irritation of the Greeks. Probably in allusion to Schäuble Varoufakis then said:

“If they miss the troika so much they can sent it to us, we will not have them.” and “Troika is a cabal of Technocrats who used to enter ministries with power play that smacked of colonial attitude. That’s finished. ” (via Finanzmarktwelt.de)

The German FinMin apparently grew taller by describing the Greek FinMin as “foolishly naive” under an outburst of laughter. Among other, he told German journalists::

“Varoufakis is the only one in Eurogroup who thinks time was not been wasted. […] I told Varoufakis he is foolishly naive in the way he deals with the media. […] Then his ideas have to be corrected. The institutions will do that together checks to be proceeded locally. The technical teams must be in Athens, Vaorufakis has signed this at the Eurogroup of 20th February. I can send him a copy. The information Varoufakis gives in interviews is totally wrong.”

Prompt was the reaction of Athens with PM Tsipras’ close aide and State Minister Nikos Pappas to say that Schaeuble’s comment were “incompatible” both with his institutional position and the European expectation for a new solution.

Pappas: “Obsession and persistence on this policy and attitude are incompatible with the path for a united and democratic Europe

Schaeuble is the main supporter of failed policies in Greece and Europe”.

“What does Mr Schaeuble think? that Greece is a banana republic, a protectorate? As Samaras and Venizelos taught him? he went so far to demand Varoufakis’ replacement. He is obsessed.”

“He does not behave as a minister of a European country, but with the arrogance of a ruler. [….]  The harsh statements are supposed to serve only domestic purposes. While he does not say anything about the deficit extension for France, he plays the Unyielding against Greece to divert the discussion. “

Oil into the fire already burning high between Greece and Germany was the decision to the Greek Parliament to proceed with the claim of WWII reparations from Germany and even confiscate German state property in Greece.

” Should there be Greek attacks on German property, Germany will know how to defend itself.”

Michelbach described Pappas’ comments on Schaeuble as “shabby and intemperate” and said that “Bad style was indeed something like the hallmark of the Radical coalition in Athens.”

Even the Greek clergy intervened in the Greek German war of words, with Metropolit Amvrosios to hit below the belt and write in his personnel blog:

“Schaeuble is inhibited. He hates everyone who is not on wheelchair.”

The situation is threatened to get really out of control and it is the second time within a month that Wolfgang Schaeuble reacts in a rather awkward way. On February 19th he had his press director to issue a statement and reject the Greek proposals to the Eurogroup hardly they had reached Brussels.

This prompted some German commentators to note that he had lost contact to reality and that he should resign.

It is really an awkward coincidence that German conservative sources told Reuters on Tuesday, that it was “Schaeuble who solicited support on Greece” and persuaded many of Merkel’s Bavarian allies, the Christian Social Union (CSU), to vote in favor of the Greek extension, last month in the German Parliament.

But then again: Peter Ramsauer, a former transport minister and leading lawmaker from Chancellor Angela Merkel’s conservative bloc CSU wrote in German populist Bild on Monday that Greece should exit the euro zone.

“By leaving the euro zone, as Finance Minister (Wolfgang) Schaeuble has suggested, the country could make itself competitive again from a currency perspective with a new drachma,” Ramsauer wrote in Bild.

Therefore: either the Euroskeptics of the CSU leave the euro zone and declare Bavaria an independent state, or Merkel tames her Schaeuble. 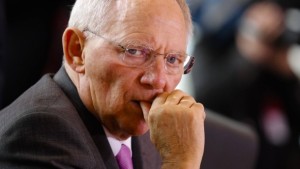 at a cabinet meeting…