Greece vs Creditors: Tsipras will never be able to satisfy the big neurotic mama

Greece “defaults” each and every month since the new coalition government came into power, should we believe the Cassandras of various nationalities and interests.

The first default scenario “saw” a default by end February, the second by end of March. Bogeyman’s words “Grexit” and “Grexident” started to whirl around. Again. For the X-time since 2010..

April has just started and an old-new threat came up for one more time: the “Credit event“. Greece and the creditors have not agreed yet on a Reforms List, time and cash are running out with a 448-euro obligation to IMF to be due on April 9th. Athens calls for the release of the last bailout disbursement of 7.2 billion euro, the lenders seem unwilling to give the money before an arrangement is reached. Several Greek ministers claimed that they would rather pay wages and pensions than the tranche to the IMF, which on its part had made it clear that this would mean a “credit event.”

The credit event disaster scenario has also a dragon that is the other obligations of Greece towards the ECB.

According to a tiny news item last week in the Greek press, Athens could indeed meets its April-obligations.

So the Greek-default scenario is over? Ha! What are you thinking? The next scenario “schedules” the Greek default for May! 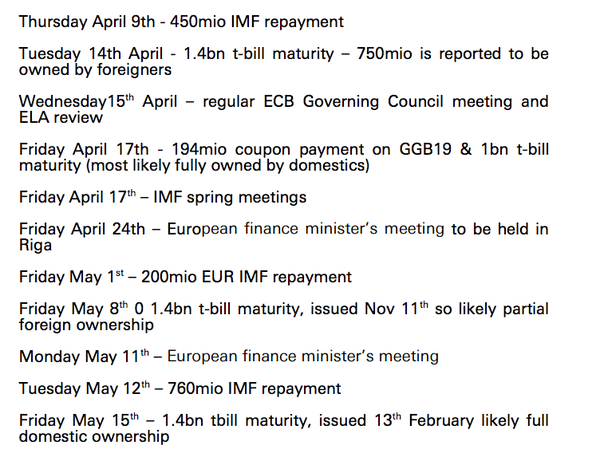 In the doomsday narrative, Greece can and does “default” each and every month.

According to Reuters, a Greek official participating in the Euro Working Group teleconference yesterday, Wednesday, has told its creditors Greece will run out of money on April 9, “making an appeal for more loans before reforms on which new disbursements hinge are agreed and implemented, but the request was rejected, euro zone officials said.”

The creditors want Greece to implement reforms that the previous government had agreed to do but then it opened the way for early elections knowing that it would be down-voted and that even without early elections, it would be impossible have the Parliament approve additional austerity measures.

Even the latest 6-billion-euro Reforms List do not seem to satisfy the creditors but this was too “far from satisfactory,” representatives of the institutions said on the call, according to Reuters.

“Some policies, like social measures, went in the right direction, while others still lacked detail or an estimation of how much they would cost, they said.

Others still, like some measures on tax, the labor market, a law to allow the payment of tax debt in installments or steps to limit the autonomy of public revenue administrations, went clearly against earlier agreed objectives, officials said.”

“Lacked detailed and cost”… The list does perfectly demonstrates details and cost but if you’re an euro zone official hiding behind anonymity, you can claim whatever you want to increase pressure and wear-out the Greeks’ nerves.

The Greek Finance Ministry denied the Reuters’s report that it had asked for the loans before the agreement and noted in a statement that “such reports undermine the European Institutions.”

What will happen if Tsipras adopts Creditors’ demands?

So let’s assume creditors can not be satisfied unless the Tsipras-goverment implements the less than a billion euro austerity measures the Samaras-government had agreed to do but took his hat and left for the conformable oppositions’ seats in the Greek Parliament.

So let’s assume that the Tsipras-government cracked by the liquidity shortage, brings the Creditors’ Reforms List to the Parliament. The number of Greek lawmakers who would be willing to approve such austerity measures would be very limited – from the government and the opposition likewise.

So, what will happen? Chaos. Political and economical.

And then? The government coalition and the Syriza-fraction will break apart – in fact it would break apart before Tsipras would bring the new and additional austerity measures for voting – .

The solution? Early elections or Unity government with the esteemed leaders conservative Nea Dimokratia and confused social-democratic-neoliberal-whatever To Potami.

Ah, we have been saying this the whole time. The issue has little to do with money and loans repayment but it is purely political.

What is clear is that the Tsipras-government will never be able to satisfy the neurotic and hysteric big fat mama, dressed in suits of Eurogroup, the IMF and the ECB .

The dirty games will continue and Greece will default on May 15th, June 16th, July 17th and August 18th.

Since last summer, Greece has been meeting its obligations to the lenders without bailout assistance and funding.

Maybe one day Greece will indeed declare a payment-stop to the lenders and they will congratulate each other for being decent and thrifty with their taxpayers’ money … but .. Hey! What a misfortune! They will never get back the loans they gave to Greece.

PS how many times have they played this game since 2010? Countless…