In a special built courtroom and under draconian security measures, one of Greece’s most important political trials against current and former MPs and members of neo-nazi Golden Dawn started on Monday morning. Party leader Nikos Michaloliakos and 68 other defenders stand trial on felony charges for having established a criminal organization, having committed several racists attacks and murder and the procession of weapons.

The trial takes place in a special courtroom built inside high security prison Korydallos in western Athens, with several antifascists groups and GD supporters to have gathered outside the prison. In addition, groups of local authorities, traders and parents organizations had gathered to protest the trial in their suburb, claiming ‘disturbance of the every day life’. 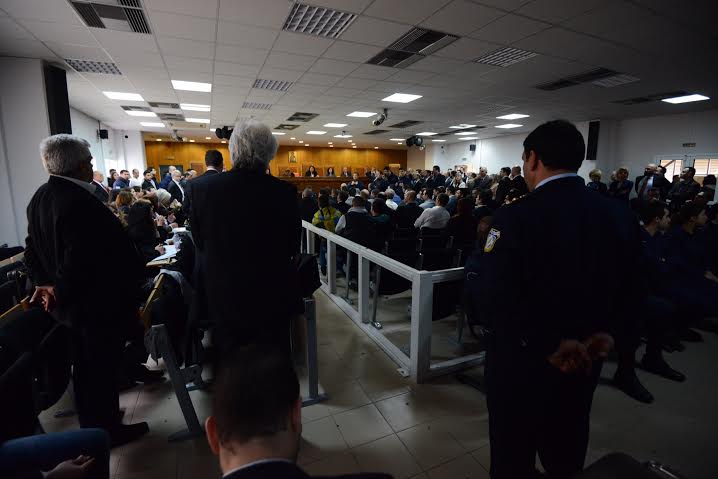 The trial began short after 9 o’ clock Monday morning in a courtroom packed with people many of them without a sitting opportunity.

25 of the main defenders, including GD leader Michaloliakos and 14 former and current MPs, being absent and represented by their lawyers. The defenders deny charges claiming that the trial was “politically motivated.”

The indictment is in fact against 70 defenders, however one of them has recently passed away, while a second one is a minor.

131 witnesses have been called to testify. 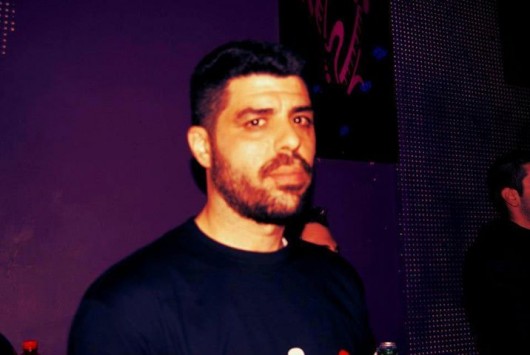 Present are also the parents of Pavlos Fyssas, the 34-year-old leftist rapper who was stabbed to death by GD member Giorgos Roupakias on 17 September 2013. Roupakias had claimed that he was never a registered member of GD.

It was Fyssas’ murder that forced Samaras’ government to take measures against the political party, put its leadership in custody and significantly reduce racist attacks against migrants.

Trial adjourned until May 7th 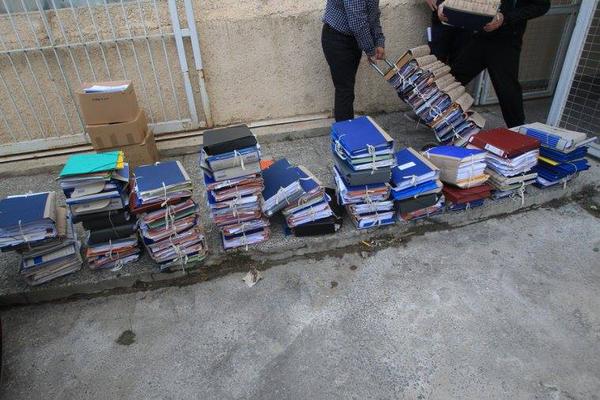 More than 1,000 pages nicely packed in dozens of files are been unloaded and awaiting for the trial on the pavement. “If we call Greece a Banana Republic, we do injustice to bananas,” a Twitter user commented.

Two hours later the trial was interrupted and it is adjourned until May 7th 2015  for “procedural reasons.” One of the defenders appeared in the trial without a lawyer, the court had to appoint one and he on his turn needed time to read the indictment. Some wonder whether it was a tactical move by the GD in order to adjourn the trial. 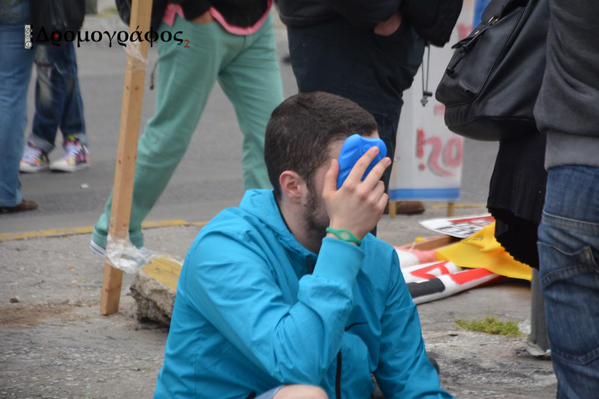 Outside Korydallos prison, the atmosphere is tense between GD supporters and antifascists groups.

According to media, antifa groups the deputy major of Korydallos and hospital doctors, two people were slightly injured outside Korydallos prison by Golden Dawn supporters and were transferred to the hospital. Both have face and head injuries. The man is a witness to testify for the murder of his friend, Pavlos Fyssas. The woman is an antifa protester.

There are also reports that a lawmaker from To Potami was attacked by a group of people wearing hoods as he was waling to the court. Anti-authoritarians have reportedly beat a GD supporter.

Golden Dawn, a marginal far-right party of 0.1% – 0.3% in elections, catapulted to 7% in 2012 and became 5th in the Greek Parliament with its anti-austerity and anti-migrants policies. The provocative behavior of GD MPs in and outside the Parliament, their openly spoken insults and bullying attitude towards the Greek political system had secured them loyal voters amid the most severe economic crisis that had hit Greece.

In October 2013, 16 Golden Dawn MPs, including the party leader, were taken one after the other into custody. They were released in March 2015, after they had spent 18 months in custody without trial.

Despite the fact that the majority of its MPs were in custody during January 2015 elections, Golden Dawn remained strong even though it has suffered some losses. It was again third party with 6.3% and elected 17 MPs to the Greek Parliament. 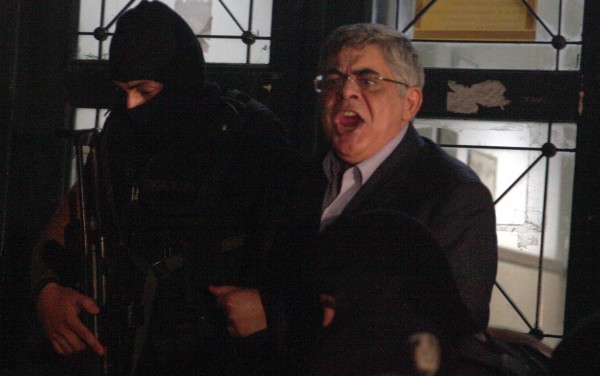 The trial against the party of Golden Dawn is considered as one of the biggest political trials in Greece after restoration of democracy in 1974.

Defenders, lawyers, witnesses, journalists, representative of unions, a total of 1,000 people are been squeezed in the courtroom which is too small for a trial of such level. Some attendees had been standing during the two-hour session. The issue of the courtroom may be taken up on May 7th.

The trial is expected to last several months.

Some considered that justice had attempted to make a joke with Golden Dawn by setting the beginning of the trial on April 20th, the day the neo-nazis commemorate Hitler’s birthday.