“The NATO ships have already started informal patrols in the Aegean,” Greek Defense Minister Panos Kammenos told the media on Tuesday morning short before he left Athens on a Chinook helicopter in order to festively inaugurate four hot spots on the islands of Lesvos, Chios, Leros and Samos. According to the Defense Minister, “the implementation of the NATO agreement already started” – even before the full operational plan has been concluded.

The informal launching of the NATO operation apparently fits very well to Greek interests, at least, those of the government. Then they have hope that the NATO-Allies will finally experience first hand how the Turkish claims, provocations, challenges and airspace violations look like.

For the Greek government and especially Defense Minister Kammenos, the launching of the German-led NATO alliance in the area welcome as it is monitoring all movements in and over the Aegean, so that the allies could also eye-witness the violations like the barrage of Greek airspace violations from the side of Turkey on Monday afternoon.

A Turkish CN–235, a medium-range twin-engined transport aircraft has been entering on and off the eastern Athens FIR without having submitted its fights plans to Greek authorities and request for permission to do so. At the same time, a pair of F-16 was violating Greek FIR over the island of Chios and delivering a dog-fight with Greek fighter jets, as four F-14 were entering violating the Greek airspace entering over Chios and exiting over Lesvos, while having flown for about 20 minutes.

The whole ‘Turkish Air-Show” was taking place over the heads of the commanders on the NATO ships and the radars were catching every little breath of the Turkish pilots.

The NATO Force SNMG2 is not sailing in the eastern Aegean to intervene in the Greek-Turkish conflict over Continental shelves disputes between the two neighboring countries or 6-to-10 nautical miles sea borders that have been challenged by Ankara. The NATO sticks to its very “neutral position” and “does not intervene in border disputes between its member” as the …. position of the Alliance is.

The German-led SNMG2 Force is apparently there to monitor and locate boats full of refugees and migrants leaving the Turkish coast, inform the Greek and Turkish coastguards, that will either rush to pick up the boats and/or inform the Frontex that has also ships in the area.

The NATO SNMG2 Force consists of four frigates and one supply vesel:

The ships are fully equipped with missiles and guns systems

Operation area: Eastern Aegean Sea, between the Greek islands of Lesvos, Chios, Samos, Kos and the Turkish coast, where the smugglers boats bring refugees and migrants.

“NATO ships will operate in the eastern Aegean between the Greek islands and the Turkish coast,” Kammenos said adding that their duty will be “to inform the Turkish coastguard about boats full with refugees and migrants leaving the Turkish coast.” The coastguard of Greece’s neighbor will have to stop the boats leaving Turkey and bring them back to the shore. Respectively, the NATO will inform the Greek coastguard if some boat manage indeed to leak through the NATO-front and reach Greece’s territorial waters. “Then we will have to take the people to the shore,” Kammenos made clear, thus revising his statement a couple of days ago, when he claimed that also “refuges caught in Greek territorial waters will be brought back to Turkey.”.

Kammnos did all he could to reassure the audience, a conservative and ultra-patriotic crowd of journalists and citizens, that “Greece will at no point give up any of its sovereign rights” due to the NATO operation and stressed again and again that “not only Turkish but also NATO helicopters taking off from frigates will have to submit flight plans to Greek authorities.” He insisted that the operation was in favor of Greece as it would stem the flow of people reaching Europe illegally.

Kammenos could not say – or he  didn’t want to reveal – whether the NATO ships will also get involved in Search & Rescue operations. The operation plan is yet being worked out.

The Greek Defense Minister said that the time schedule of the NATO-Sea Mission was not defined  and that” the operation will continue until the conditions that called in to action were eliminated.”

However he did not hide that he had some reservations concerning some potential “failures.” Migration Minister Yannis Mouzalas expressed the same concern on Tuesday morning and explained “these failures” as “Push Backs.”

NATO pushed aside the Frontex

While more and more international analysts see the NATO force in the Aegean as “an effort of the Western Alliance to keep a close eye on Syria and the Russian moves,” many wonder why the Frontex was pushed aside.

While a decision to mobilize a NATO Force is rather easy and quick, the Frontex is ponderous due to its political, procedural, administrative and financial mechanism as well as its authorization to operate outside the EU.

Furthermore, non-EU-member Turkey has so far resisted the idea of the Frontex to operate within its territorial waters. Negotiations with Turkey to extend the Frontex mandate could take months, the same would the supply of staff and material by EU-member states. The refugees would not wait.

Greece could not solve the problem on its own means, anyway. Strengthening the sea border controls, an area of some 250 nautical miles (from Lesvos to in length with the Greek Navy would be first of all a very costly operation for the debt-ridden country. And second: Turkey would most likely display the same attitude as it has done since last spring: Play deaf when informed by the Greek coastguard about refugees boats on their way to Europe. 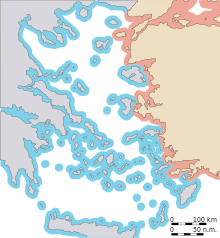 PS of course, the NATO does not need to operate between Greek Chios and Kos and Turkish Cesme and Bodrum to see the airspace violations by Turkish F-116. The Alliance’s South Force has enough equipment to follow these incidents at every time.