Breaking News
Home / News / Economy / Eurogroup on Greece: a carrot for a bunch of sticks

Eurogroup on Greece: a carrot for a bunch of sticks

The marathon negotiations in Brussels ended at 3 o’ clock in the morning. The Eurogroup finance ministers but in fact Germany and the International Monetary Fund agreed to give a carrot to Greece yet keep waving a bunch of sticks for as long as it takes. At first stage, lenders will pour so much money to Greece, just enough to fulfill its obligations towards the lenders and a small leftover so that the state will pay its arrears to private sector. At the same time they will focus on the implementation of the ‘prior actions’ and have assigned Greece with new tasks, like correcting austerity legislation – correcting to the worse, of course.

The Bailout tranche: release of the bailout tranche of €10.3 billion will happen in  in two or more disbursements: €7.5billion in the second half of June, the rest could start coming as of September provided

“The additional disbursement for debt servicing needs will be subject to milestones related to privatization, including the new Privatization and Investment Fund, bank governance, revenue agency and energy sector to be assessed by the European institutions and verified by the EWG and the ESM Board of Directors.“

In common human language this translates into: once we reach a milestone, we discuss the milestones and contemplate whether we need to add another milestone, and while we think about it there will be no money.

According to state broadcaster ERT TV at 12 noon, the €7.5bn are expected to be released around 20th June

€2.8bn – €3.2 bn might be poured in real economy as Greece will pay arrears to private sector

Decision on the Greek Debt Relief issue will be postponed for the near future after 2018 – as Schaeuble wanted saying “no debt relief discussion before German elections in 2017 – or for the far future of 99 years as is the lifespan of the new Privatization Fund.

As for the Program Review… well.. it has not been concluded. Greece’s European lenders demand changes in prior actions legislation the Greek government already legislated. Special reference is made to “Pensions Reforms” and according to Greek media this morning, lenders demand that the government has to find 70 million euro to fill the gap that has been created after PM Alexis Tsipras decided to not ask retrospective as of 1.1. 2016 the “poverty allowance” (EKAS) from 70,000 low-pensioners/beneficiaries.

The Eurogroup mandates the EWG to verify in the next few days the full implementation of the outstanding prior actions on the basis of an assessment by the institutions, in particular the corrections to the legislation on the opening up of the market for the sale of loans, and on the pension reform, as well as the completion of all prior actions related to the government pending actions in the field of privatization.“

In creditor’s logic the formula is apparently

which is not quite true because not all EKAS-beneficiaries receive the same amount. But…whatever.

Taken into consideration that FinMin Schaeuble said yesterday “legislation texts has to be examined and many pages are in Greek”, I am pretty sure that until the next Euro working Group, lenders will have found out more “legislated prior actions that will need to be corrected.:

The unsustainable target of 3.5% Primary Surplus remains the same:

“It therefore provides further reassurances that Greece will meet the primary surplus targets of the ESM programme (3.5% of GDP in the medium-term), without prejudice to the obligations of Greece under the SGP and the Fiscal Compact.”

Rescue? What rescue? For sure a political win for Schauble, a small win for Tsipras who will get at least €7.5bn and avoid default to lenders and an IMF that pretends to step back for the time being.

On the surface the long and winding Eurogroup agreement is certainly a success for the eurozone politicians – and who cares about the details. If it wasn’t for the Brexit referendum on June 23rd, the Eurogroup would not have given a single cent now for the simple reason that the German FinMin is obsessed with Greece and the majority of the EZ FinMins have taken a loyalty oath out of fear the powerful man in Berlin could crack them within a week.

Business as usual: The match was played good and at the end the Germans won.

Could Greece not agree on lenders’ terms and conditions? With such debt? Hardly…

The problem remains What about the common Greeks? 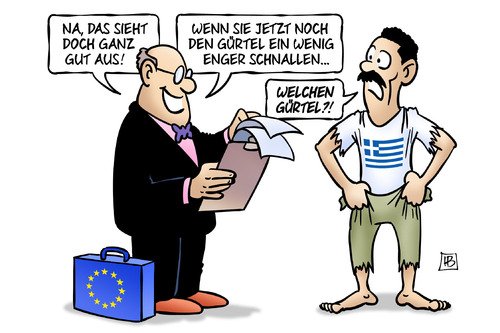 Eurogroup: Well, it looks really very good – If you only tighten your belt a little tighter