A hell of a night for thousands fleeing fire: 60% of Moria hot spot infrastructure burned down (Updates)

September 20, 2016 Very Mix Comments Off on A hell of a night for thousands fleeing fire: 60% of Moria hot spot infrastructure burned down (Updates) 186 Views

It was a hell of a night for the some 4,000 refugees and migrants in Moria hot spot. Mothers carrying their babies in their arms, fragile elderly, disabled, children and men… they all started to run away from the fire that was sweeping through the tents and the prefabricated containers. 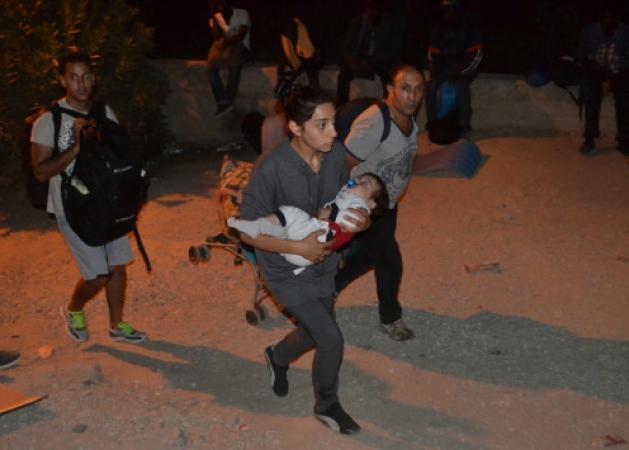 They had no time to grab a bag with diapers, clothes or documents. They left in panic, wearing only their clothes. Some were even barefoot. 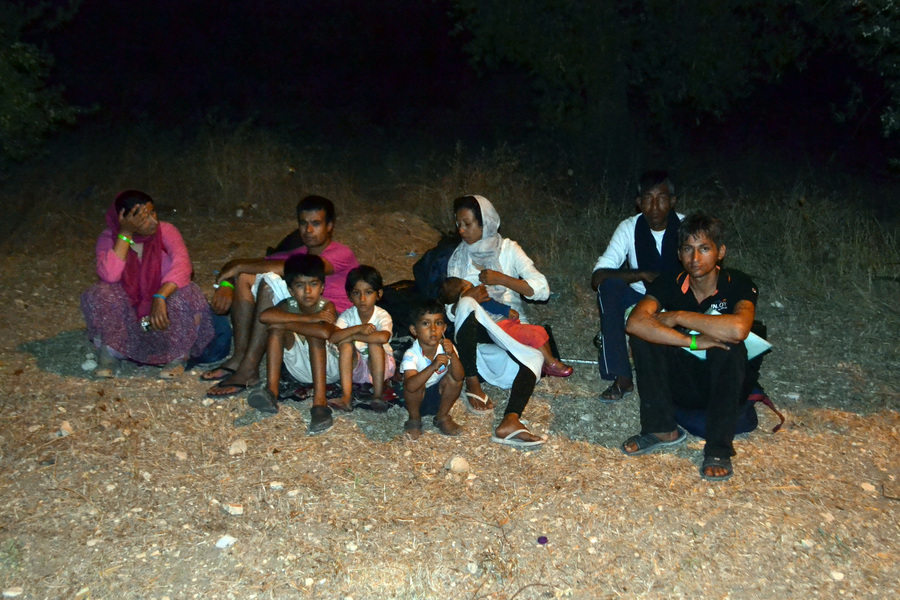 Tuesday morning, the sun light showed the extend of the damage: estimated 60% of the infrastructure in the hot spot of Moria was burned down. 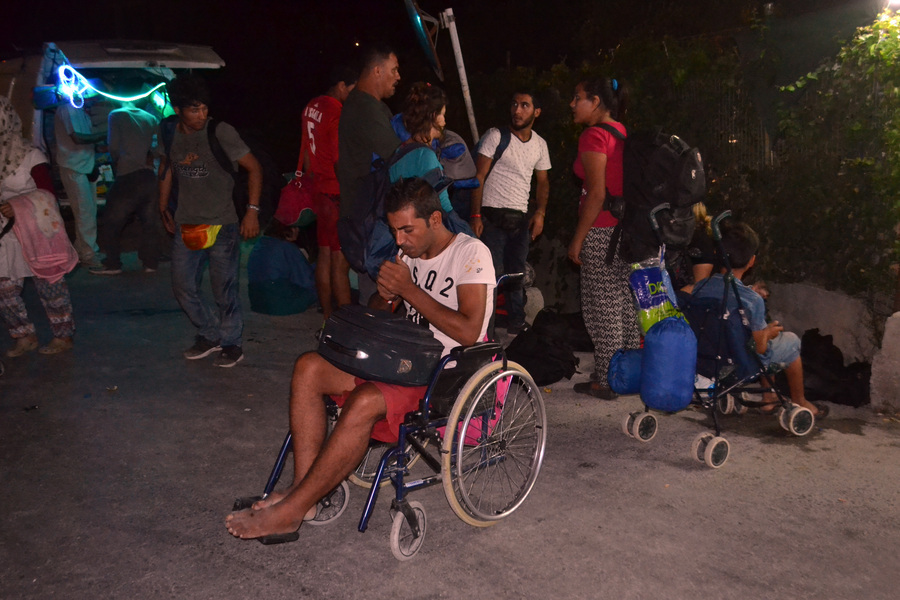 The residents, estimated 4,000 refugees and migrants, from different countries and of different ethnicity tried to form groups and flee together away.

“The Arabs tried to move towards the city, but were hindered by police forces.

The Afghans moved towards the village of Moria and from there to the city of Mytilene. At the entrance of Moria, angry locals and police units hindered them from entering the village and sent them back towards the burning camp.

Many tried to reach Mytilene using a 25-km long way. On foot.

The fire was extinguished around midnight. Those refugees and migrants who returned to the hot spot found their tents burned down and the camp soaked in water and mud due to the fire brigades operation.” (LesvosNews)

According to Fire Brigades Department of Lesvos, 50 tents and 3 prefabricated units were burned down, together with clothes and shoes. 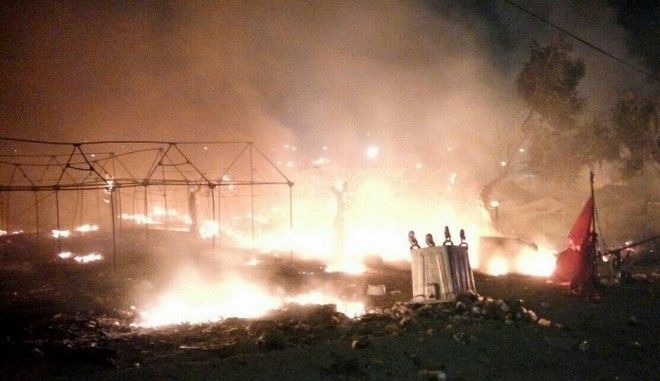 The fire inside the camp broke out at 7:55 pm on Monday. The reason is still officially unknown. Citing police sources, Greek media report that it was the camp residents who set fires in several parts of the camp. 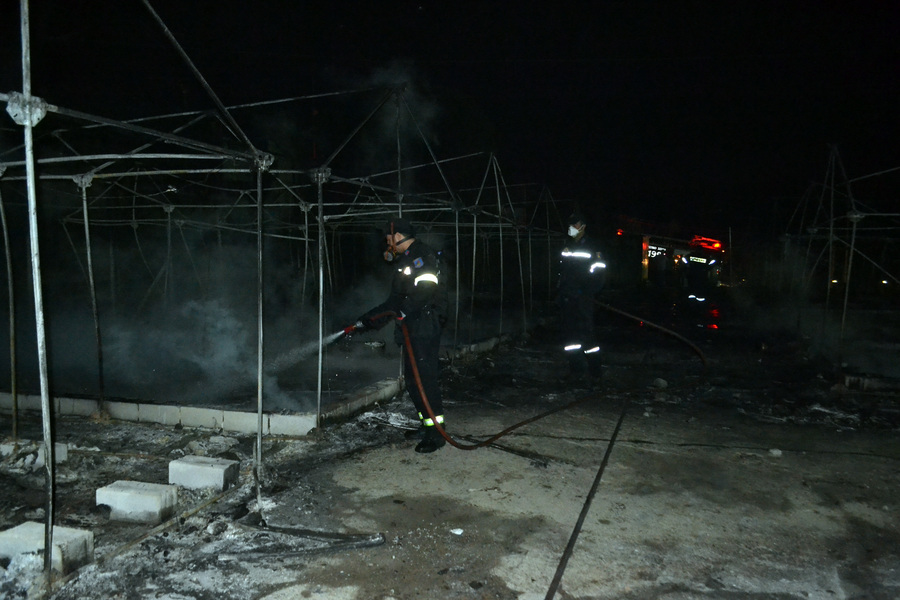 Before the fire, clashes between ethnic groups took place, when a group of Afghans attacked a group of Syrian refugees. It often occurs that it comes to power struggle among different groups especially at the time of  dinner. 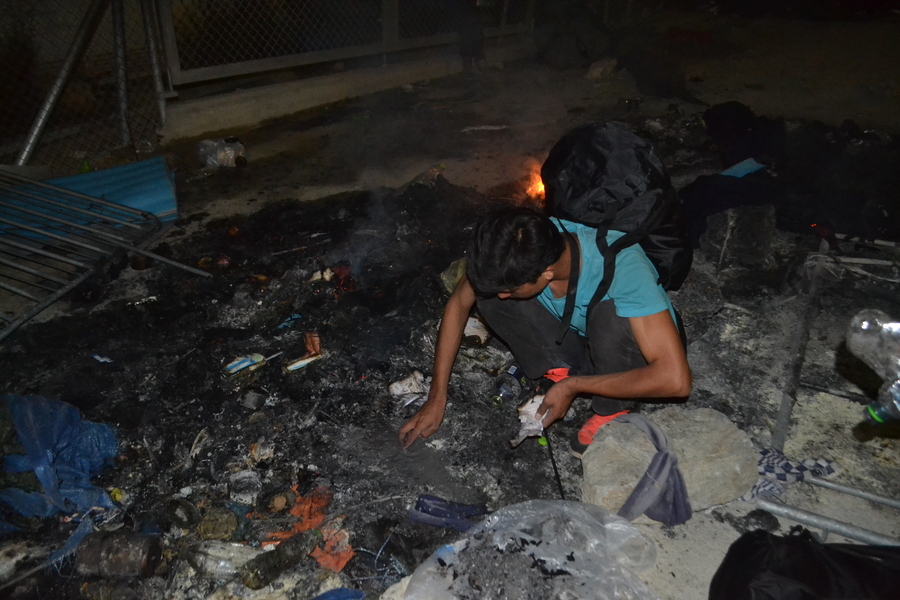 Police detained 18 migrants and refugees for the clashes, 9 of them have been arrested. 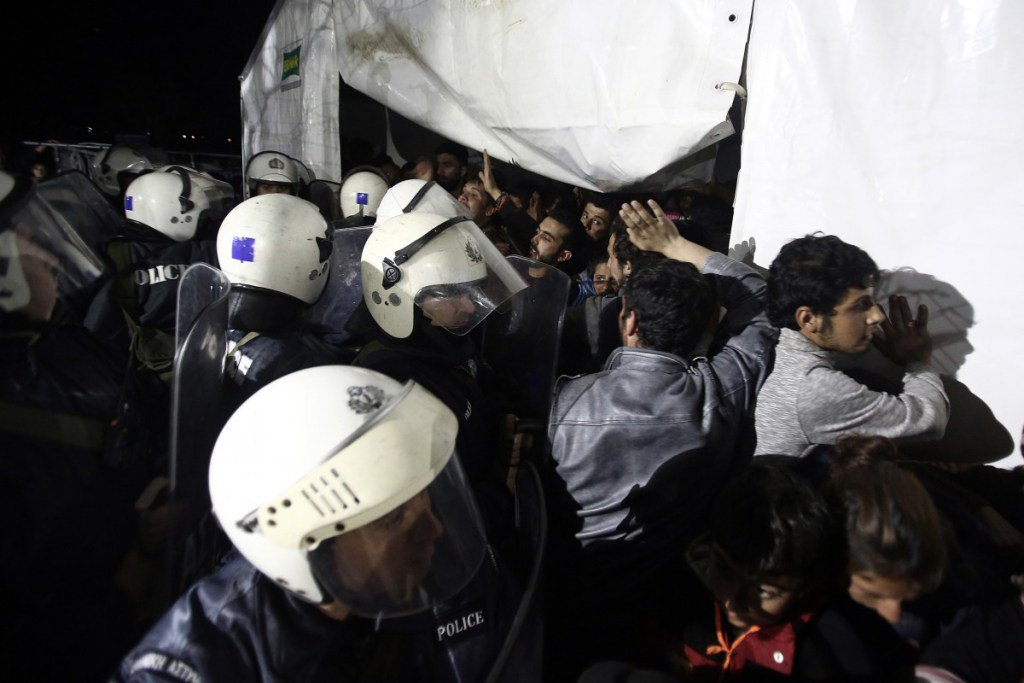 The Greek government is reportedly considering to provisionally host the stranded refugees and migrants families on chartered ships and ferries, until the Moria hot spot is in full operation again. Media report that the first ship is already on the way to Lesvos. 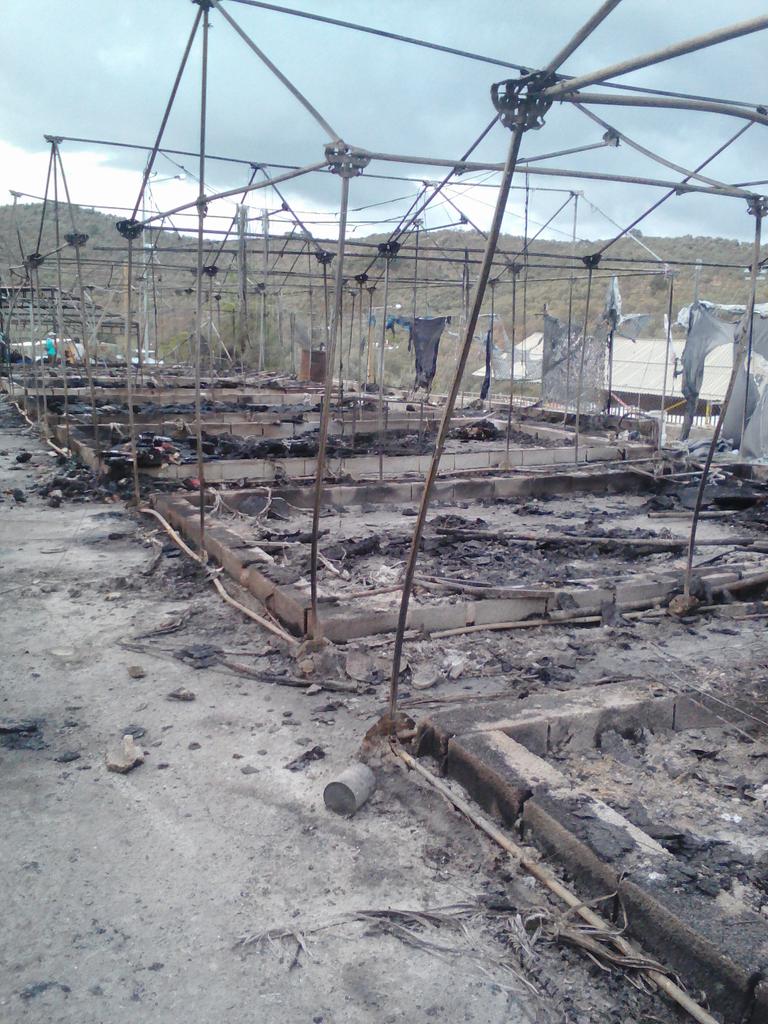 The situation on the island of Lesvos has been very tense in the last days, when members of right-extremists of Golden Dawn moved from the neighboring island of Chios to incite the residents of Lesvos against the refugees and the migrants.

Earlier on Monday,  locals from Moria and surrounded villages held a anti-migrant protest together with members of GD. Four women were attacked.

Almost at the same time, some 300 angry young men left the hot spot and tried to launch a protest, after rumors spread that mass deportations to Turkey were imminent. Police forced them back to the camp.

Monday noon, two fires were set in agricultural area near the camp and burned 15 acres of land with olive trees.

The government is deploying two riot police units to Lesvos.

It is not the first time that the Moria camp is on fire or that clashes occur among the frustrated residents who are stuck in Greece and do not know what their future will be as asylum procedures proceed with a turtle pace.

According to Greek Migration Ministry, there are 5,708 refugees and migrants on Lesvos that has two camps (Moria and Kara Tepe) with a capacity for 3,500.

EU member states have failed in their commitment to send asylum experts to Greece to accelerate the asylum process. At the same time, the planned relocation of 6,000 people per month from Greece to EU countries remain an ambitious phrase on the EU Turkey Deal.