Breaking News
Home / News / Society / Some Greeks cannot afford even a loaf of bread: Bakers in Kozani unite to help them

Some Greeks cannot afford even a loaf of bread: Bakers in Kozani unite to help them

Did you know that there are people in Greece who cannot afford to buy even a loaf of bread at a cost of €0.60 – €0.70? Almost a year after Greece surrendered into the arms of the international lenders and the International Monetary Fund and the austerity cuts started to affect people’s lives, a bakery in our neighborhood was offering a loaf of bread at a special price for pensioners and unemployed. The special price was just half a euro.

At one point, I remember that more and more people were going to this bakery and asking for bread from the previous day for a couple of cents or even free of charge.

Two days ago, the grim Greek reality hit me again. I was at the bakery sometime at noon. All different kinds of bread loafs were waiting for customers, nicely set in order, one by one, next to each other.

Yet, somewhere, in a corner at one of the lower shelves there was a group of breads: several loaves, long and round, white and whole-wheat, a couple of baguettes.

“What are these?” I asked the baker and he answered “This is bread from yesterday, for the poor. We give it free of charge.”

He told me further, that he had 6-7 returning customers who come every second day for the bread from yesterday. These people are mostly elderly, pensioners. And “maybe 2-3 people per day,” people he does not know, who just step in and ask for “old bread for free.”

The problem of poverty is not widespread only in Athens, where the cost of living is much higher than in the countryside.

Today, I read about the action of the Bakers’ Association in Kozani, in Northern Greece. Customers can buy extra bread for those in need, while the bakers will keep records of the “Bread on the waiting” – as they call their action – and give it to those who cannot afford it. 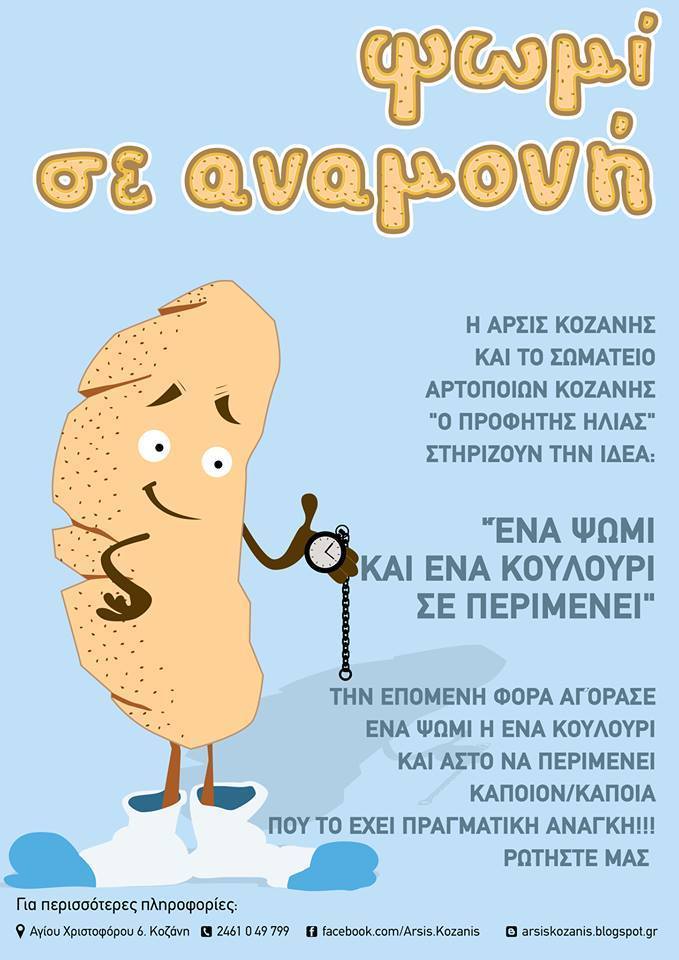 Action Slogan: “Buy a loaf of bread or a bagel and let it wait for someone in real need”

“All 26 bakeries have joined the action,” the chairman of the Association, Dimitris Leoudis told the press.

Bravo to all bakers in Kozani 🙂