In a guest contribution to German business weekly WirtschaftsWoche, German Chancellor Angela Merkel and US President Barack Obama spell out the importance of trans-Atlantic relations, and urge progress on climate change and a free-trade deal.

Germany and the United States are deeply linked together: Our joint history has led us through both bright and dark chapters and resulted in the deep friendship we enjoy today. That friendship is based on our shared commitment to personal freedom and dignity, which only a vibrant democracy under the rule of law can guarantee.

Our countries share a joint responsibility to protect and preserve our way of life. It is in this spirit that we are working hard to ensure that international law and norms are respected around the globe – which remains a prerequisite for stability and prosperity. Our countries are committed to collective defense within the North Atlantic Alliance (NATO) because we want to preserve the security of the Euro-Atlantic area as a whole. We cooperate closely in the fight against terror, including in the Global Coalition to Counter ISIL, because we must protect our citizens and because we will not sacrifice our way of life to the enemies of freedom. Our deep respect for human dignity compels us to provide humanitarian relief and aid for millions of refugees worldwide, because we know it is our treatment of those most vulnerable that determines the true strength of our values. And U.S.-German partnership was essential to achieving a global agreement in Paris that offers the world a framework for protecting our planet.
These values of democracy, justice and freedom form the foundation of our successful economies. Both Germans and Americans know that these principles are the basis for creativity and innovation which drive our economic development. And both our countries embrace the idea that the socially responsible market economy, also includes a commitment to social security, advancement opportunities, quality education for all, and an advanced and efficient infrastructure. The paths that we choose in pursuit of these goals, like how we organize our social security system or our universities, may vary, but the underlying bedrock of our shared values is strong.
At a time when the global economy is evolving more quickly than at any point in human history…cooperation is now more urgent than ever.
On this firm basis of shared values, German-American economic relations are flourishing. Europe and the United States form the largest economic zone in the world, accounting for one third of global trade and almost half of the global gross domestic product. Strong German-American economic relations form an unshakeable core of this zone. Since 2015, the United States has become Germany’s most important trading partner with a trade volume of 173 billion euros, and conversely, Germany has become a cornerstone of U.S. economic relations with the European Union. Indeed, the significance of transatlantic trade is even more impressive when we look at trade between the United States and whole of the EU: the trading volume in 2015 amounted to 620 billion euros, the largest between any two partners worldwide. Behind these impressive figures are millions of companies and employees who produce these traded goods and services and whose jobs depend on them.

Of course, German-American relations go far beyond trade. Our companies invest to a great extent in each other’s country; they cooperate with each other in projects, joint ventures, and in investments. Germans make pilgrimages to Silicon Valley, where people practice and think about the future of the digital economy more than anywhere else. Americans thrive in Germany’s many world-class manufacturing and engineering companies, small and large. Americans and Germans learn from each other’s labor systems and study how each benefits their citizens: Americans study Germany’s remarkable labor apprenticeship system and Germans learn from how American companies benefit from the United States’ spectacular diversity.

The basis of such close economic relations is often the personal contact between our citizens. Our people flow across the Atlantic as students, scientists, artists, employees and tourists. Our two-way trade and investment opens new opportunities for synergies, new products, and innovations in technology. At the end of 2014, bilateral investments between Germany and the U.S. totaled $339 billion, creating high-paying jobs in both our countries.
As Germans and Americans we must seize the opportunity to shape globalization based on our values and our ideas.
Simply put: we are stronger when we work together. At a time when the global economy is evolving more quickly than at any point in human history, and the scope of global challenges has never had higher stakes, such cooperation is now more urgent than ever.

Germany and the United States are spearheading this effort, including through our work in the G-20, the Presidency of which Germany will assume this December. Together in the G-20 we are working to both strengthen global growth and make it more inclusive, while also addressing pressing broad global challenges like climate change, migration, and global health security, and specific challenges like addressing excess capacity in steel and other industries. We also see great potential for successful cooperation in future-oriented areas such as the digitalization of the workplace.

Our shared conviction about the power of trade and investment to lift living standards prompted us to pursue the important project of establishing a Transatlantic Trade and Investment Partnership (TTIP). There is no question that both German and American employers, workers, consumers, and farmers would profit from TTIP. Negotiations started three years ago and, considering the complexity of these issues, have made solid progress. An agreement that knits our economies closer together, based on rules that reflect our shared values, would help us grow and remain globally competitive for decades to come. Today, many U.S. and European companies and employees already benefit from transatlantic trade and investments. Global markets and production chains are increasingly intertwined. We realize that decisions in one country have tangible effects in others. To meet all these challenges, we need rules that are currently being negotiated in the framework of TTIP.

Today we find ourselves at a crossroads—the future is upon us, and we will never return to a pre-globalization economy. As Germans and Americans we must seize the opportunity to shape globalization based on our values and our ideas. We owe it to our industries and our peoples—indeed, to the global community—to broaden and deepen our cooperation.

After a 30-hour visit to Athens, Barack Obama landed in Berlin, the second stop of his last world tour before leaving office. Upon his arrival in Berlin Wednesday evening, Obama had an unofficial dinner with Merkel that lasted 3 hours. Today, Thursday, a joint press conference will take place at around 5 pm, GR time. 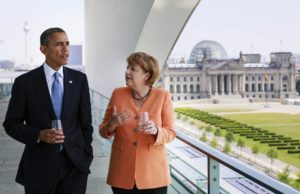 Greece is eager to see whether President Obama managed to convince Germany in terms of Greek debt relief.