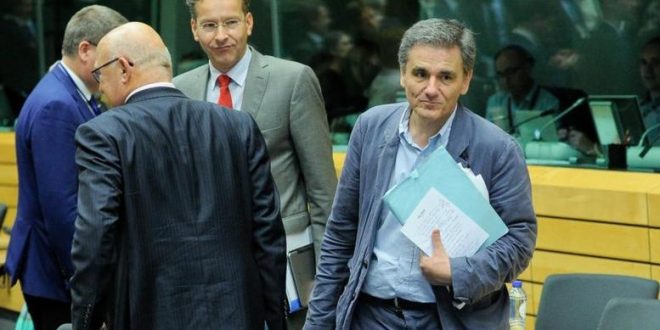 Odd things are happening. The Eurogroup did not reveal details of the agreement between Greece and its euro area creditors in Malta on Friday. The statement makes a simple reference to the agreement adding a Tweet by Eurogroup head, Jeroen Dijsselbloem.

The Eurogroup was briefed on developments in the intense talks between the European Commission, the European Central Bank, the International Monetary Fund and the European Stability Mechanism and the Greek government over the past month.

The institutions and the Greek authorities reached an agreement on the main elements of the policy reforms required to move ahead with the second review of the current macroeconomic adjustment programme, which is necessary to unlock further financial assistance to Greece. This agreement refers to the size, timing and sequencing of the reforms.

The institutions will continue technical work in Athens as soon as possible to swiftly conclude a staff level agreement.

With a link, the Eurogroup statement on Greece then makes a simple reference to the conclusions of the previous meeting of March 20th.

Eurogroup encourages a rapid conclusion of the staff level agreement

The institutions (the European Commission, the European Central Bank, the International Monetary Fund and the European Stability Mechanism) and Greek Minister for Finance Euclid Tsakalotos briefed the Eurogroup on the developments regarding the second review of Greece’s economic adjustment programme.

The Eurogroup noted progress made on a number of issues, including on the fiscal measures and particularly on non-performing loans. It encouraged the Greek authorities and the institutions to seek a rapid conclusion of the staff-level agreement, based on the understanding they reached last month.

The institutions and the Greek authorities are to hold intensive talks in Brussels in the coming days, focusing on the main outstanding issues. These include the growth-friendly rebalancing of Greece’s public finances over the medium term (in 2018 and beyond) and the labour market reform.

At least, it posts Dijseelbloem’s statement after the Eurogorup meeting!

Remarks by J Dijsselbloem after the Eurogroup meeting April 7,2017

Let me start with Greece. We have achieved significant progress on the second review since the last Eurogroup in March. As you remember, then, on my initiative, we had changed the strategy, we had changed the order of things and we had intensified talks to, first of all, reach an agreement between the institutions and the Greek government on the key elements, the overarching elements, of the policy package, let’s say the big reforms, and once that was achieved, to finalise details and solve the remaining smaller issues. We have been successful in doing so. So that is the news I can bring you today. We have an agreement on those overarching elements of policy, in terms of size, timing and sequencing of the reforms, and on that basis, further work will continue in the coming days, with a view for the mission to return as soon as possible to Athens to complete the work.

Let me give you some headlines. We have agreed on a 2% reform package, 1% in 2019 mainly based on pensions, 1% in 2020 in principle, mainly based on personal income tax. And we agreed that the Greek government can also, in parallel, legislate expansionary measures, on the assumption that the economy is doing better and the fiscal path is doing better than expected, and using the fiscal space that then will be created by these additional reforms.

We invite the institutions and the Greek authorities to continue the work putting the last dots on the “i’s” and to reach a full Staff Level Agreement as soon as possible.

Once a Staff Level Agreement is reached, the Eurogroup will come back to the issue of the medium-term fiscal path for the post-programme period and debt sustainability, building on what we have already agreed in May 2016, in order to reach that overall political agreement. And it is very important for Greece that we do this as soon as possible. But, as we said, the big blocks have now been sorted out and that should allow us to speed up and go for the final stretch.

I don’t want to think that should something go wrong, the Eurogorup – the institution – will claim its president and the Greek finance Minister Euclid Tsakalotos just said what came into their mind…