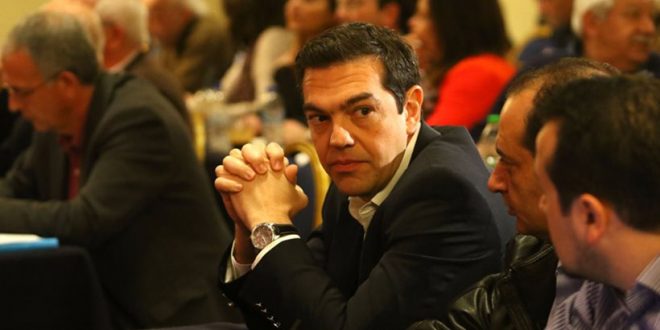 In an op-ed to Wall Street Journal, Greek Prime Minister Alexis Tsipras urges creditors to “end punitive approaches of the past”. He stresses that the differences between the International Monetary Fund and the Europeans are harming the Greek economy.

The recent economic crisis persuaded the international community that long-term economic development is viable only through coordinated actions against the challenges that demographics, debt trajectories, trade imbalances and the lack of reforms pose to growth. This contrasts with the previous view that such factors were merely matters of macroeconomic performance.

Greece and other countries hit by the financial crisis are typical examples in this respect. As an advanced economy and member of a strong currency club that has achieved high growth rates in the past, we are ready to enter a growth path.

Seven years after the first rescue plan, Greece has undertaken front-loaded fiscal consolidation and deep structural reforms in all sectors in exchange for financial support. We have fulfilled our obligations, despite the immense social and economic cost of three successive adjustment packages.

During the past two years, Greece has overperformed. The International Monetary Fund recently acknowledged this by revising upwards its own primary-surplus projections, to 3.3% from 0.1% of gross domestic product in 2016, and to 1.8% from 0.7% of GDP in 2017.

These are the results of the progressive tax policies that have modernized Greece’s tax system and tackled corruption and tax evasion. It’s no accident that the Organization for Economic Cooperation and Development granted Greece first place in tax reforms for 2015.

We’ve placed a special emphasis on creating a fair and friendly investment environment, a stable tax environment, new financial instruments as well as incentives for investment. All in all, we’ve set the foundation for a new development paradigm that focuses on innovation and exports.

We are now ready to create a coherent social-protection system that can take on poverty, social exclusion and the risk of entrapment in long-term unemployment. The combination of a strong economy and an effective welfare state guarantees inclusive growth and the mitigation of rising social inequalities.

Greece is finally turning the page. However, it is vital to proceed with decisive steps regarding Greek debt in a way that no economic cost—not even a penny—would be incurred by European Union taxpayers. The technical solutions that make this politically viable do exist.

The timely specification of medium- and long-term debt-relief measures would create smoother fiscal paths and the vital space for sustainable growth. This would allow the inclusion of Greek bonds in the European Central Bank’s quantitative-easing program, pave the way for our return to the markets and signal to the international investor community that the Greek economy is returning to normality.

The clash between the EU and the IMF over Greece’s public debt deprives our economy of invaluable time, which would set back the long-awaited return to growth. We are committed to honor our obligations to our creditors, despite the political costs that may entail. But the safest path to this goal is to foster growth and end the punitive approaches of the past.

Greece isn’t an isolated case -it’s the scene where all of Europe’s underlying problems have come to the surface.

The global political and economic environment is in a state of uncertainty. Europe still faces the consequences of a prolonged economic crisis, along with new challenges such as the refugee crisis. These challenges have fueled a growing euroskepticism and pose existential risks to the European project at a time when more and better Europe should be the answer.

Paternalistic, technocratic and elitist approaches cannot be the answer to the rise of the extreme right. Only by deepening democracy and embracing solidarity we can offer hope to the European vision in these turbulent times.

We have done this before and we can do it again.

Tsipras op-ed appears while Greece’s financial team participates in IMF-World Bank spring meetings in Washington hoping for a compromise that will lead to conclusion of second review of the current Greek bailout program.