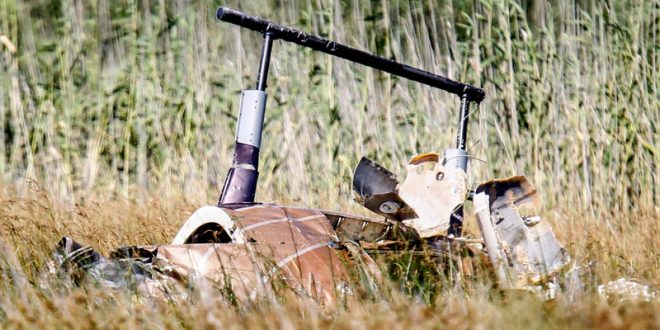 A small helicopter with three people on board crashed in Schinias near Athens on Friday morning. Two people were killed an one survived the helicopter crash in the wetland of eastern Attica. One of the passengers was transmitting the flight live on Facebook. The helicopter had concluded aerial sprays against mosquitoes in the wetland. The pilot allowed two passengers for a sight seeing flight.

The crash occurred short before 10 o’ clock  in the wetland of Schinias, some 45 km northeast of Athens.

Strong Fire Brigades forces rushed to the swamp area where the helicopter crashed for reasons unknown for the moment.

One passenger has managed to free himself from the debris. He was transferred to a hospital.

Short time later, the Fire Brigades pulled out of the helicopter two people who were unconscious.

According to Greek media, the two rescued were the helicopter operators. Some media claimed the two were dead, however there is no official confirmation so far.

The helicopter was conducting aerial sprays against mosquitoes when it crashed. It belonged to a private company. It was hired by regional authorities to conduct aerial sprays.

9 vehicles of the Fire Brigades, 27 fire fighters and one helicopter of the Greek Navy have been operating in the swamp area where the helicopter crashed.

Two people on board have been confirmed dead. One is the pilot, a retired pilot of the Greek Air Force, aged 55. The second victim is a security officer of the wetland.

The man who survived the crash is a student who was participating in a 6-month practice program at the regional government of Eastern Attica. He is hospitalized with injuries, his life is reportedly not at risk.

Local authorities told media that the helicopter had concluded the aerial spraying and was conducting a second flight with the two passengers to show them around.

“The flight was off duty. The student had asked for a flight in order to see the procedure. Then a security officer of the wetland joined the two,” deputy regional governor of East Attica Petros Filippou said adding that according to preliminary information the copter was caught in power cables. 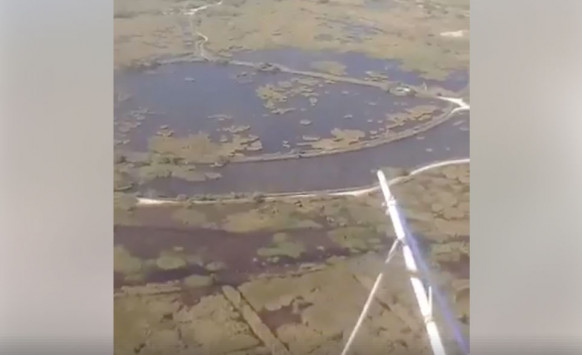 While some preliminary reports claimed that the copter crashed short after it took off, a video shows that the crash occurred during the flight.

One of the passengers was transmitting Live the flight on Facebook.

Sources told media that the security officer was transmitting footage via his mobile phone. The video on the Facebook account of the man started at 9:23 a.m. Friday and run for about 1:30 minutes.

One can see how the helicopter gradually loses on height and the live transmission is suddenly interrupted obviously due to the crash.

The man died in the helicopter crash.

Authorities investigate the reasons for the helicopter crash.