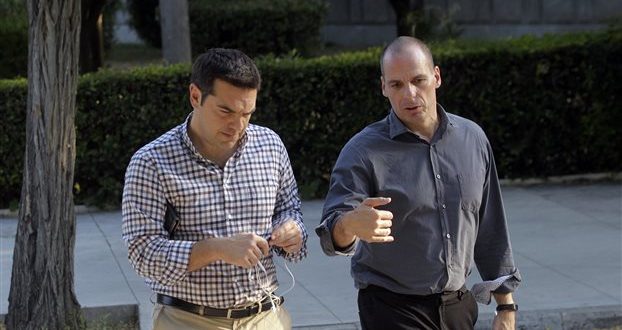 Yanis Varoufakis keeps up with the good work and his revelations about the crucial negotiations with the European lenders in the first half of 2015. In an interview with Sunday newspaper Proto Thema, the former finance minister revealed that Prime Minister Alexis Tsipras was considering the accept Schaeuble’s plan about a temporary Greek exit from the eurozone.

Tsipras was fully aware of the alternative plan of German finance minister, Varoufakis claims, and that he was also prepared for the tough and occasionally dirty game with the lenders.

“He was totally incapable to implement a consequent policy,” Varoufakis cried on the shoulder of  the reporter of a newspaper dedicated against left-wing SYRIZA in general and the prime minister in particularly.

One of the most important parts in this interview, however, is that Varoufakis published seven  sms Tsipras and he exchanged during the tough negotiations in the peak of the Greek crisis – one of the many.

According to Varoufakis, Schaeuble tabled his 5-year- Grexit plan short before the Eurogroup on May 11th 2015.

Varoufakis, [16.21]: Wolfgang made an incredible pirouette in our today’s meeting.
Tsipras, [16.22]: That is?
Varoufakis, [16.25]: He sends you a message about time out …
Tsipras, [16.26]: Does it propose an exit or adoption of a parallel coin?
Varoufakis, [16.27]: The first through the second: He admits that the Memorandum [bailout agreement] destroys us.
Tsipras, [16.30]: Then tell him, if he means it, let’s discuss how it could be done under the best possible conditions. Funding, consensus and mutual assistance without bankruptcy.
Varoufakis, [16.35]: He offers us tremendous help for the transition. “

The former finance minister has often claimed that he has kept records of all conversations with the government, the ministers, the lenders.

The sms exchange a little later:

Tsipras, [17.50]: I am curious to know what he has in mind. Tell him about the other proposal to see how he sees it.
Varoufakis, [17.51]: OK. Do I have the green light to talk with him completely confidentially about all these issues?
Tsipras [17.53]: Yes, but be careful not to give him the impression that you agree. And be careful that he will not leak it.
Varoufakis, [17.53]: OK. Our line is: 1. I speak with him simply to investigate his proposal without any commitment. 2. If he leaks, we will deny it. “

In his interview to Proto Thema, Varoufakis underlined that he has been asking for a special investigation, for “a special court, even a military court. A forum where data and positions about how the country went into bankrupt will be submitted, how this bankruptcy was covered-up and even deepened with the bailout agreements and how the opportunity was missed in 2015.”

Furthermore, Varoufakis revealed that there were two plans: Plan B that contained a sustainable solution within the euro and Plan X that could be implemented if the Troika would kick Greece out of the eurozone.

Plan B included a parallel system haircut of the SMP bonds the ECB has and change of the legal framework for the Bank of Greece.

According to Varoufakis, he gave Tsipras the Plan X one week before the referendum with the note “Read and Cry!”.

KTG understands that the sms are included in the Greek version of his book “Adults in the Room” that is to be published in September.

KTG understands also that this is a rather wrong PR work as by September all Greeks will know Varoufakis book by heart through the many interviews and excerpts published in the local media. All Greeks? Sorry, that’s exaggerated. The All Greeks enjoy the cool sea, while the opposition sits inside and texts furious messages against Tsipras.

KTG also knows that Schaeuble told the Greek team already towards end of March 2015 that he had a fully worked out Grexit plan. He warned Varoufakis & Co that if they won’t come to their senses, they will find themselves purchasing goods and services in Drachma. I think, I wrote about it in June 2015. Too lazy to search for link, right now.

BTW: On Saturday, another former SYRIZA minister, Dimitris Stratoulis, revealed that 45% of the Central Committee of SYRIZA wanted Grexit. “Five ministers and 35 MP wanted return to Drachma” Stratoulis said. He was one of them. he left the party before the September 2015 elections and did not manage to enter the Palriament, as several other former ministers.

PS What’s behind these revelations against Tsipras apart from his book promotion? As Varoufakis is working on his own political party, I believe, he tries to unite the left-wing, pro-Drachma lobby around him. He is definetely more charismatic than colorless Stratoulis, Lafazanis and the other Drachma old guard of  SYRIZA.

Talking about Greeks & The Sea: The video presents a dog who loves to catch fish directly from the sea.

The dog exercise shis new profession at a beach in Preveza, Epirus. He mostly catches small fish and occationally a big fish. The dog has many Greek and foreign admirers, local media report. 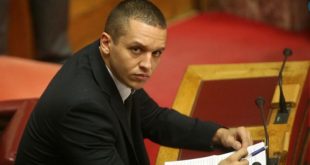