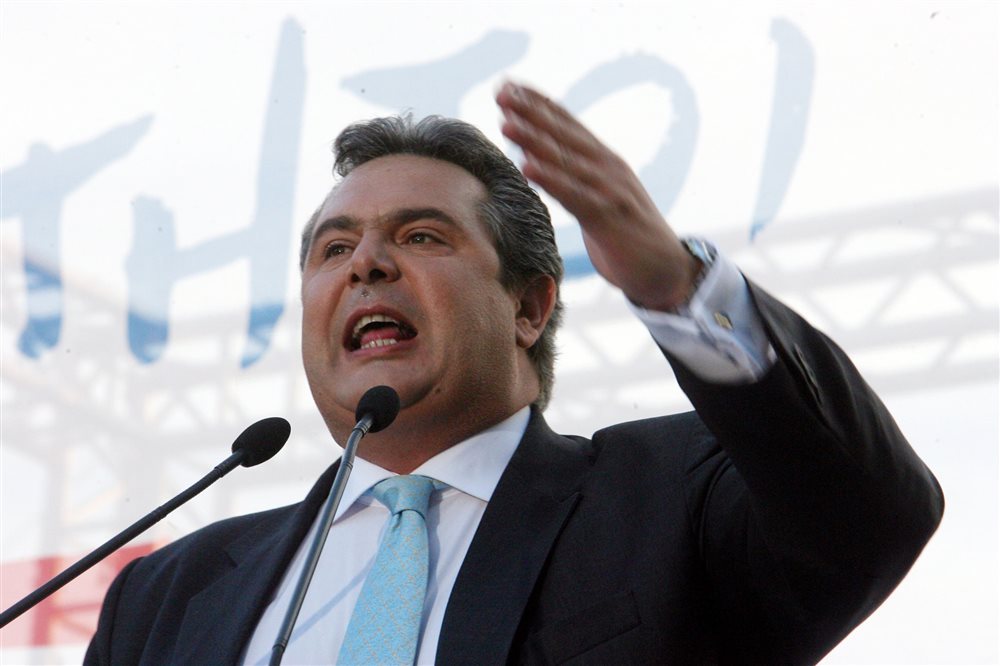 The claims came from other than the leader of Independent Greeks and Defense Minister, Panos Kammenos.

In an interview to Skai TV, Kammenos claimed the Greek subsidiary of Eldorado Gold, Hellas Gold,  in Halkidiki, Northern Greece, was a case of ‘fraud’ and ‘money laundering’.

He supports all investment in Greece, “except the one of Hellas Gold which was a case of fraud that did money laundering between the purchase and the sale of the company,” Kammenos said.

The minister did not elaborate on his claims and left everyone wondering what exactly he had in mind when he spoke about fraud and money laundering.

“A huge environmental disaster will occur if they proceed with the surface mining,” the minister said further, stressing that “if Hellas Gold want to proceed it will have to respect the environmental preconditions the government puts on the table.”

Hellas Gold: We reserve all legal towards Kammenos

Reaction of Hellas Gold to Kammenos’ claims was quick.

“These statements are too heavy” the CEO of Hellas Gold, Dimitris Dimitriadis, told SKAI TV just a couple of hours later.

Hellas Gold “reserves all legal rights” to respond to the statement by Panos Kammenos who claimed investment in the gold mines in Chalkidiki were “scam” and money laundering,” Dimitriadis said.

These claims are “unacceptable especially when Hellas Gold has invested one billion US Dollars in the struggling Greek economy,” the CEO added.

Concerning to Kammenos’ comment on the environmental impact of gold mining in Kassandra, Dimitriadis said that Hellas Gold has been justified in 16 environmental cases that were taken to the council of State.

The CEO of Hellas Gold did not reveal whether the company would seek a political dimension to Kammenos’ claims by contacting the Prime Minister.

Dimitriadis clarified though that Kammenos’ statements are separate from the arbitration procedure initiated by the Greek State against the company over a possible breach of contracts. The arbitration is to begin later this month.

A day earlier, the company announced that it postponed “until further notice” the inauguration at the Olympiada mining facilities scheduled for 15 September 2017.

The Vancouver-based company, which already operates Stratoni mine in the country’s north, has been trying to develop the Skouries and Olympias projects for years, but local opposition and an ongoing back-and-forth with authorities have delayed progress.

In early 2012, Eldorado Gold acquired the gold, silver and copper mines of Halkidiki. This project was initiated by Eldorado subsidiary Hellas Gold in 2004, with a commitment to not only exploit the mines but also construct and operate a metallurgy plant to produce pure valuable metals. This commitment was reiterated under the terms of the environmental approval issued by the Hellenic Ministry of Environment & Energy in July 2011, which covers the four inseparable components of the Halkidiki mines project. The establishment of a metallurgical plant is therefore a central obligation of Hellas Gold, both under the terms of its contract with the Greek state and the environmental approval.

Hellas Gold chose to employ the “flash smelting” pyrometallurgical technology, developed by the Finnish company Outotec. The Greek authorities approved this technology on environmental grounds in 2011 and defined its use as a “necessary precondition” for the whole project. However, five years on, Hellas Gold and Outotec failed to demonstrate that flash smelting could be successfully applied under the conditions and design parameters specified in the environmental study. This resulted in the rejection of the technical plan for the copper-gold metallurgical unit by the Ministry of Environment on July 5, 2016. A remedy petition filed by Hellas Gold in September 2016 was met again with a final rejection on November 2, 2016. –
More on the dispute here.