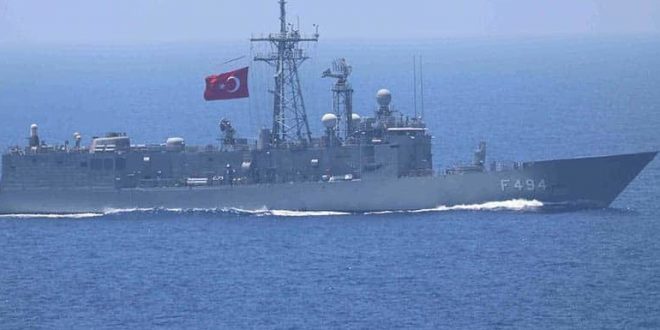 Turkey’s top general, Chief of General Staff, Hulusi Akar,  has claimed that Turkey has the capacity to keep the Aegean Sea “under control” while simultaneously conducting its ongoing military incursion, “Operation Olive Branch”, in northwest Syria.

“We have the strength to conduct an operation in Afrin and keep the Aegean under control,” the Turkish state-owned Anadolu Agency quoted General Hulusi Akar as saying on Friday.

“Akar was likely referring to possible threats from Greece,” Turkish media report adding “its neighbor across the Aegean Sea, with whom tensions have risen sharply in recent months.”

The leaders of two of Turkey’s major opposition parties called for action to take back Aegean islands they said were under Greek “occupation” last December. Since then, a minor confrontation occurred when the Greek defence minister attempted to gain access to the uninhabitated, disputed islets of Kardak and Imia. He was rebuffed by Turkish coastguard vessels.

Meanwhile, Ankara increased tension also in Cyprus in Friday evening. Turkish Navy vessels harassed the Italian giant ENI’s ‘Saipem 1200’ drillship and forced the captain to manoeuvre out of their way and eventually come to a stop 15 nautical miles from the ‘Soupia’ (Cuttlefish) Block 3 plot to where it was heading.

According to Greek state broadcaster ERT, the drillship remains 15 nautical miles away from Block 3 plot also on Saturday afternoon, while the captain was awaiting instructions by the Italian ENI..

Kasoulides said the ENI drillship remained in the same spot overnight on Friday and that the Turkish ships were still conducting illegal exercises in the Cypriot EEZ.

“Italy’s and Cyprus’ foreign ministries are in constant contact,” Kasoulides said, adding that the government was also in contact with ENI’s main offices in Rome about the situation.

He added that when the harassment began, ENI had told the captain of the Saipem not to turn back and to stay in place. The solution to the issue would come from Rome and the Italian government, the outgoing foreign minister said.

The Cyprus government has also notified the EU of the Turkish vessels’ interference in the Saipem 1200’s journey towards Block 3.

On Friday, citing government sources, CyBC said that similar tactics had been carried out in the past, but Friday’s harassment had been stepped up a notch with three vessels circling the Saipem.

PS This is a report of the Feb 10 post due to some technical problems and website break.