Breaking News
Home / Sports / “Football Grexit is not of concern for us,” says Greece’s Sports Minister 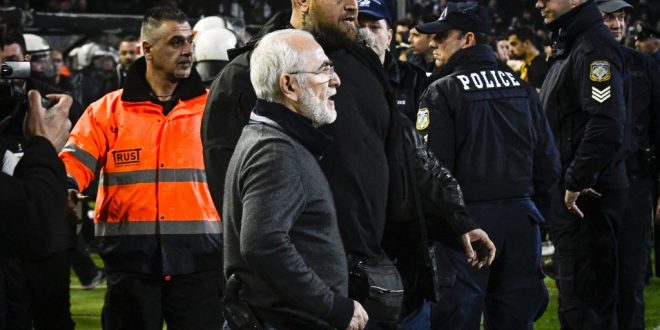 “Football Grexit is not of concern for us,” says Greece’s Sports Minister

March 13, 2018 Sports Comments Off on “Football Grexit is not of concern for us,” says Greece’s Sports Minister 203 Views

“Football Grexit is not of concern for us,” deputy Culture & Sports Minister Giorgos Vasiliadis said on Tuesday as FIFA and UEFA have called for extraordinary meetings on Greece’s Football  on Wednesday. FIFA has threatened to ban Greece from world football after the domestic league was suspended following PAOK chairman Ivan Savvidis storming the pitch armed with a gun and threatening the referee on Sunday, in a derby match against AEK.

UEFA is reportedly to take up the Greek issue but also the recent incidents during matches in France, UK and Spain.

“Extreme phenomena call for bold decisions,” Vasiliadis said a day after the incident and stressed that the government has no intention to step back.

“If we don’t receive commitments, if the statements won’t come to an end, if we won’t agree with the new regulatory framework, the new fines, we will bring the issue to the end. We will not risk the public order and the security because they like to fight,” Vasiliadis said to an interview with daily efsyn.gr.

Stressing that the existing framework is not enough, Vasiliadis said “It is not of concern for us if there is football Grexit.”

He stressed the need for FC owners to sign  a memorandum and to accept fines for inflammatory statements.

“We don’t step back, we are not under pressure, nobody is having us in his hands,” he said adding that “‘everyone has responsibility.”

As expected Greek football clubs expressed their disappointment over the suspension of the domestic League, saying why should they pay for what Savvidis did.

The government insists that no matches take place until the legal issue is solved. According to state broadcaster ERT, there will be no matches at least until the end of March, beginning of April.

Greeks wonder, why he was not arrested while in the pitch with a gun on his belt on Sunday.