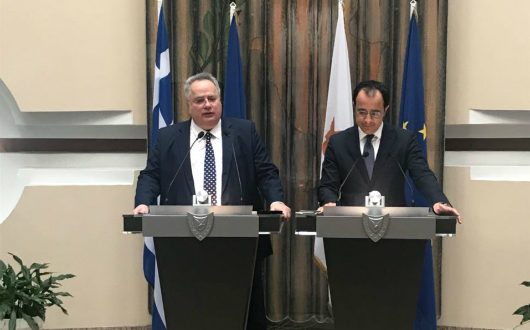 Turkey’s efforts to legitimize “illegal” claims on Greek sovereign territory are doomed to fail because they’re contrary to international law, Greece’s Foreign Minister, Nikos Kotzias, said on Monday during his visit to Cyprus.

he said that Turkey has submitted a document to the United Nations containing “erroneous positions” regarding Greek territory in the Aegean and the eastern Mediterranean and is trying to present such claims as lawful.

“International law cannot be manipulated to suit such schemes,” Kotzias said at a joint press conference with his Cypriot counterpart, Nikos Christodoulides.

“It is well known that Greece always dreams of and hopes for a European Turkey, because it will mean a Turkey that doesn’t occupy foreign territory, a Turkey that doesn’t seek to give guarantees and to have rights of intervention in third countries. A Turkey that respects human rights at home, that does not intervene – as in Afrin – in third countries, and thus a European Turkey with whom we will have normal relations and normal borders,” the Greek Foregin Minister said among others.

Turkey disputes Greece’s sovereignty over a number of uninhabited islands in the eastern Aegean and eastern Mediterranean, and says Greece’s efforts to conduct an offshore gas search falls within its own continental shelf.