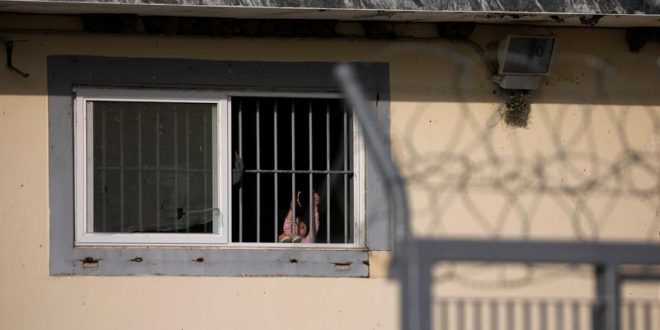 HRW: Asylum-seeking women detained together with men unrelated to them

Human Rights Watch research in Northern Greece in late May 2018 found women and girls housed with unrelated men in sites for reception and/or detention of asylum seekers.

Twelve women and two girls interviewed said they had been locked in cells or enclosures for weeks, and in one case for nearly five months, with men and boys they did not know. Four said they were the sole females confined with dozens of men, in some cases with at least one male partner or relative.“Women and girls should not be confined with men who are complete strangers, even for a day,” said Hillary Margolis, women’s rights researcher at Human Rights Watch. “These women and girls came to Greece seeking security and protection, and instead they are living in terror.”

The interviews were conducted between May 19 and 24, The Human Rights Watch said in a statement.

The Greek government has not provided authorities in northern Greece with sufficient resources to respond to a surge in arrivals over the land border with Turkey in April. Officials who met with Human Rights Watch acknowledged that the increase led to a slowdown in reception and identification procedures, including registration of asylum claims, as well as overcrowding of and lengthier stays in reception and immigration detention facilities.

Pending completion of reception and identification procedures, newly-arrived irregular migrants and those seeking international protection are held in border police stations in the Evros region, in the Fylakio pre-removal detention center, run by the Hellenic Police, and/or in the Fylakio reception and identification center (RIC), run by the Ministry for Migration Policy.

The Ministry and the Hellenic police granted Human Rights Watch access to these sites, and authorities at the pre-removal detention center and RIC helped identify female migrants in the facilities so that Human Rights Watch could approach them for interviews.

Two of the women said they had been at the pre-removal center in cells with their male partners and many unknown men for at least two weeks. “Maha,” a 38-year-old woman from Iraq, was visibly shaking as she described being the sole woman in a cell with about 60 men for over two weeks. Maha said she avoided drinking water due to fear of using the shared toilet inside the cell. She said that she was living almost exclusively inside an enclosure she and her partner created by hanging blankets around their bunkbed.

“I haven’t moved my legs for 23 days,” she said in tears, demonstrating how she cowered with her knees hugged to her chest all day. “If I had a way to kill myself, I would have.”

According to a police registry given to Human Rights Watch researchers, at the time of the interview she and her partner were held in a cell with 32 unrelated men. Maha was released days after her interview, but her partner remained in detention.

Authorities at the pre-removal detention center said there is a separate designated cell for women traveling alone, but they also put families in that cell “if necessary,” such as during periods of overcrowding.

“Women and girls in these sites are overcome by fear from being locked up with men who are complete strangers,” Margolis said. “Greek authorities need to put an urgent stop to this, and grant them the security, privacy and dignity they deserve.”

Accounts from asylum seekers in Fylakio pre-removal detention center and the reception and identification center (RIC) in Fylakio, Greece:

Fatima (all names have been changed), 24, from Algeria, who had been at the pre-removal center with her husband for 20 days: “For 20 days I have been the only woman [in our cell]. The others are all single men. I had difficulty at the beginning. I sleep at night covered in a blanket. One night a man [in the cell] came and lifted the blanket and was looking at me. When I go to take a bath, the men come and try to look over the wall…. I am very stressed…. I feel like I have reached the bottom. I feel like I am broken.”

Suha, 20, from Morocco, who had been in the Fylakio pre-removal detention center with her husband for two weeks. At the time of the interview, they were in a cell alone, but they had previously been in the same center for two weeks in a cell with mostly men: “There were two other girls and 60 to 70 men [in the cell] … I was fighting for myself every day … The worst time was when I would go to the toilet. All of them would follow me with their eyes, say things. Some men, when they see a woman they act like animals. They would call out to me, ‘Stand up, stop here, let us look at you, you’re beautiful.’ The toilets are mixed [for men and women.] The bath is the same. There is no lock on the door. If you sit, they can’t see you [over the wall]. But if you stand they can see you from the chest up. Imagine being a woman in those conditions.”

Samira, 18, from Syria, who had been in the RIC with her 15-year-old sister for three weeks: “Since I’ve been here I’m unable to eat. I’m very stressed. I can’t leave my sister, I have to take care of her…. I’m constantly afraid that someone will enter our container. I don’t sleep at night – I stay awake during the day and sleep in the morning… I only shower once every two weeks because I feel like people are watching me [in the bathroom] … I wake up every morning at 3 a.m. feeling scared and nervous.”

Nada, 16, from Syria, who had been in the RIC with her older brother and sister for nearly two months: “We’re the only family in our section, it’s all single men. The only women are me and my sister. Everyone is afraid here. There are more than 20 men [or unaccompanied boys] living in our section…. At first, we were 20 people in the [same] container, but they have all left. It was mixed men and women. We didn’t feel safe and couldn’t sleep. We stayed up all night…. We shared the toilet with strangers. I used to take my sister with me and ask her to wait at the door.”

Nadir, 21, from Syria, who had been in the RIC for 20 days with his 6-year-old niece, Abra, whose mother became separated from them during the crossing from Turkey to Greece: “We are in the same container with two families…. The doors don’t lock…. The families staying with us are Iraqi Kurds. We can’t communicate with them – how can we feel safe? It is not a question of nationality, it is just that they are strangers. I can’t leave [Abra] alone. If she wants to go outside, I go outside; if she wants to go to the toilet, I go with her. There are single men [or unaccompanied boys]. If you come at night around 10 p.m. you will hear the noises they make [yelling] and understand why we don’t feel safe.”

Abbas, 35, from Iran, who had arrived at the Fylakio pre-removal detention center with his wife, 36 the previous day: “When we reached here, [the police] said, ‘You have to be separated [from your wife].’ I said, ‘No, we can’t be separated, we are a couple.’ Then the police said, ‘If you don’t separate, you’ll both have to go to the room with all the men.’ My wife was shocked and started crying. She was really scared. I said, ‘Okay, let’s separate.’ I kissed her, said goodbye, and they put her in another room and me in the room with all the men.” Eventually, he said, the police brought his wife to a cell opposite his and then put them together in that cell, along with unrelated families.

Additional Information on Combined Detention of Women and Men