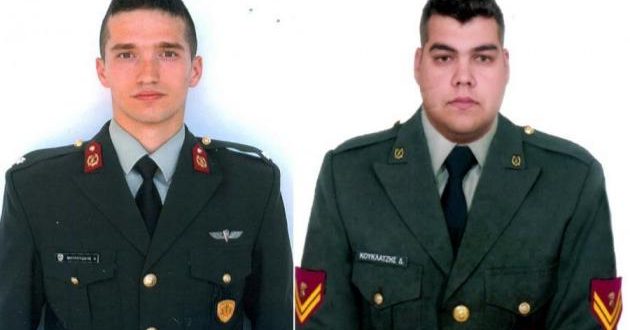 Turkish prosecutor threatens Greek soldiers with up to 2 years imprisonment

July 18, 2018 Turkey-GR Comments Off on Turkish prosecutor threatens Greek soldiers with up to 2 years imprisonment 338 Views

The news about the two Greek soldiers in the hands of Turkish authorities are not promising.  Information leaked by court sources in Greece’s neighboring country indicates that lieutenant Aggelos Mitretodis and sergeant Dimitris Kouklatzis are facing a prison sentence of up to two years. Although officially no charges have been pressed,  judges allege illegal entry into a military zone although they are themselves military personnel and they should not have lost their orientation.

What looks like good news is that the scenario of espionage charges seems to be abandoned.

According to Greek media, during the hearing of the sixth release request on Tuesday, the prosecutor reportedly spoke in his statement of “a strong suspicion of the crime of entering a forbidden military zone.”

“Because of the examination of digital material on their mobile phones,  charges are likely yo change,” the prosecutor reportedly said.

According to the Turkish prosecutor, the violation of borders was committed by soldiers who should have the least knowledge of the course in the area, increasing the probability of committing the crime. “Due to the fact that the threshold for the crime is at least two years, it is now appropriate to continue their detention,” the prosecutor said.

In similar incidents in the past, Turkish soldiers illegally entering Greek territory were sent back without further implications and in mutual agreement.

But Ankara is furious about Greek court rulings that have rejected three extradition requests for the 8 Turkish soldiers who fled to Greece right after the failed coup in 2016. Not only were they not extradited, Greek asylum services have granted political asylum to three of them, while the same is expected for the remaining five.

“Although after the meeting with  president Recep Tayyip Erdogan  last week, Alexis Tsipras appeared more optimistic, what now comes from Turkey is not good,” notes in.gr adding  that “Turkey plays a game on the Greek soldiers’ backs and threaten to change the indictment.”

PS on this occasion we can learn a new Greek proverb “ψύλλους στ’ άχυρα“: literally translated it means that Turkish authorities are searching not for needle but for “flees in the haystack” in an effort to make a case where there is no case. Would there have been any incriminatory material on their mobile phones, Turkish authorities would have found it by now as they have many times conducted their checks in the 140 days they keep Mitretodis and Kouklatzis in high security prison in Edirne.