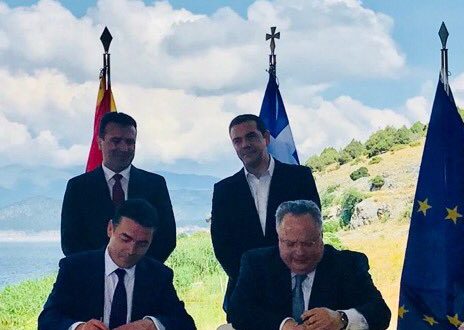 The Parliament of  the Former Yugoslav Republic of Macedonia has approved a government proposal setting September 30 as the date for a referendum on a deal with Greece to rename the country.

Sixty-eight deputies in the 120-member parliament voted on July 30 in favor of holding a referendum on the question: “Are you in favor of NATO and EU membership, and accepting the name agreement between the Republic of Macedonia and Greece?”

Ahead of the vote, Prime Minister Zoran Zaev told reporters the agreement — aimed at ending a long-running dispute with Greece that should help pave the way for Macedonia to join the European Union and NATO security alliance — will “define the future of the Republic of Macedonia.”

Protests have taken place both in Greece and Macedonia since their foreign ministers signed a deal on June 17 to rename the country the Republic of North Macedonia — North Macedonia for short.

Macedonian lawmakers later voted in favor of the bill to ratify the agreement, which is strongly opposed by the main opposition party, VMRO-DPMNE .

The nationalist VMRO-DPMNE party also disputes the announced referendum question, saying the deal with Athens should not be linked with the country’s EU and NATO membership bids.

The party’s deputies did not attend the vote in protest.

“The question must be understandable, simple…it should state, ‘Do you support or oppose the agreement with Greece which envisages a name change,'” VMRO-DPMNE deputy head Aleksandar Nikolovski told RFE/RL before the vote.

The name dispute between Skopje and Athens dates back to 1991, when Macedonia peacefully broke away from Yugoslavia, declaring its independence under the name Republic of Macedonia.

Neighboring Greece has objected to the name Macedonia, saying it implies territorial claims on the northern Greek region with the same name.

Because of Greek objections, Macedonia was admitted to the UN under a provisional name, the Former Yugoslav Republic of Macedonia (FYROM).