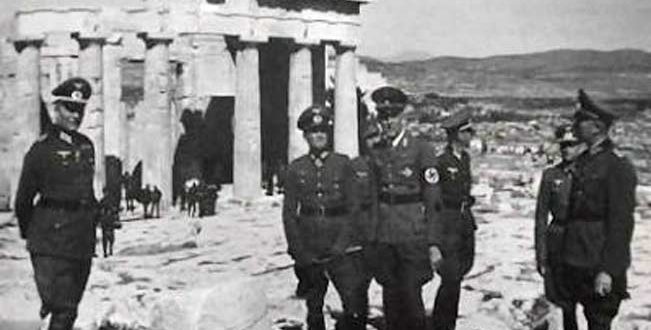 Did Berlin think that Greece forgot the issue of German War Reparations? Berlin may have forgotten the issue thinking it had scared off Athens with its multiple rejections of Greek claims. But the Greeks did not forget.

The Parliament’s special committee report on the German war reparations will have been submitted to the plenum by the end of 2018, Parliament Speaker Nikos Voutsis said on Wednesday.

Speaking to the state broadcaster ERT, Voutsis underlined that “the prime minister has recently made statements and I have repeatedly said it before. The report on the special committee established to examine the issue of the German war reparations will come to Parliament and will be taken into account. There will be a demand at a transnational and legal level.”

Voutsis added “it is clear and I have said it before that we did not want to give the impression during the discussions on the Greek bailouts that we may offset this sacred issue in the memory of the Greek people with possible financial or material demands of these programs.”

He said that the report is thorough and will come for voting in the Parliament at the end of 2018. “It is a decades-long demand,” Voutsis added.

Last week, Prime minister Tsipras brought back the issue of the German War Reparations after a long time of silence on the issue.

“It is a historic duty for those who left and for the next generations,” Tsipras said while he was visiting the Memorial of the Nazi victims in Kandano by Chania on the island of Crete.

“Claiming the German reparations are for us a historic duty. By the end of the year, the report prepared by the committee that invstiaged the issue will come to Parliament and further actions will be decided,” Tsipras tweeted.

An article on the issue was also recently published by the President of the Hellenic Republic Prokopis Pavlopoulos.

Greece brought up the claims on German War Reparations in 2012 by the ND/PASOk coalition as the country was struggling with the economic crisis and creditors led by Berlin was asking water and heaven. Alexis Tsipras and SYRIZA/ANEL government reiterated the claims after it came to power in 2015, the issue continued until 2017.

Berlin has repeatedly turned down the Greek claims even though they were not officially demanded so far.

In 2014, Germany urged debt-ridden Greece to “forget about War Reparations and look towards a united Europe.”

It is time to take up the issue again.

The German War reparations have been estimated to be between 185 and 278 billion euros.

The claims deprive form the occupation of Greece by the Nazis during the WWII, an enforced loan and the looting of Greece’s assets and treasuries, not to mention the death of thousands of people.