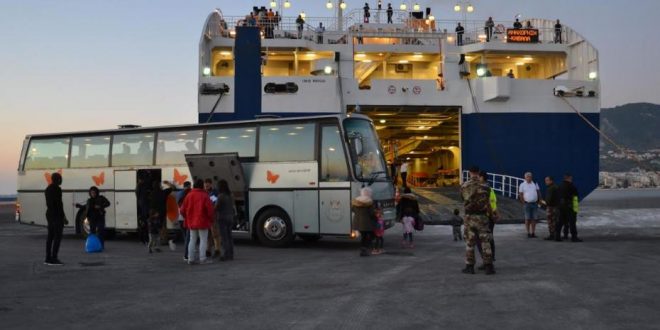 The first one hundred asylum-seekers from Moria Camp on the island of Lesvos left for Kavala on board of a ship early Friday morning. They are heading to a new camp in Volvi area near Thessaloniki in Northern Greece. The new camp has a capacity for 1,400 people.

The group is the first of a total of 2,000 asylum-seekers expected to leave Moria by end of September.

The Greek Migration Ministry seems determined to relocate a total of 3,000 asylum-seekers to the mainland after heartbreaking appeals for inhumane conditions in Moria.

Another 400 people are scheduled to leave Moria during the upcoming week. Some will be relocated to the Volvi camp, others to the camp of Katsikas by Ioannina in Western Greece.

Citing sources form the Migration Ministry, local media lesvosnews.net writes that another 1,000 people will be relocated to a new camp by Preveza also in Western Greece during the month of October.

Priority for the relocations have vulnerable groups andthose who have concluded the asylum procedures.

Aim of the relocations is to improve the conditions in Moria camp as well as the tent camps outside, the sources said.

Migration Minister Dimitris Vitsas said on Friday that 1,043 people were relocated form Lesvos to other facilities on the mainland between 1st and 17th September.

“This doesn’t solve the problem, it just smooths it,” he said.

Vitsas pointed out at the increase of  new arrivals this summer, that “have doubled when compared to the same period of 2017.”

The problem persists as we relocate asylum-seekers but new people keep arriving, he stressed.

“3,000 people were relocated from Moria and 5,000 arrived from the Turkish coast, this makes things difficult” Vitsas said.

He added that the situation on Lesvos, Samos and Chios has reached its limits.

On the island of Samos, local authorities have started to collect signatures to have the 4,000 asylum-seekers relocated form the camp in Vathi.