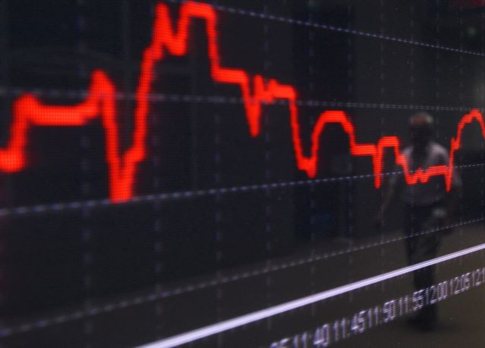 Athens Stocks Exchange under pressure, Greek banks in sell off

October 3, 2018 Economy Comments Off on Athens Stocks Exchange under pressure, Greek banks in sell off 620 Views

The Athens Stock Exchange is currently under pressure, as banking stocks are under a strong sell off, with Piraeus Bank to be even moving within the limit down, Greek media report short after 12 o’ clock noon on Wednesday.

In particular, the General Index recorded losses of 3.45% at 657.66 units, while turnover amounted to 21.7 million euros and the volume to 16.7 million pieces.

The banking sector remains at the forefront of sellers, with loses to have reached even double -digit rates.

“The market seems unable to halt its sell off, which is associated with rumors that contain the element of exaggeration,” notes capital.gr.

One such example is the -29.45% of Piraeus today, which is a continuation of yesterday’s loses of -13.23% lose. The bank implements the restructuring plan, and expects the adoption of new targets for the reduction of NPEs by SSM .

However, according to Capital.gr, a commitment to the restructuring plan is the issue of a bond loan for the Bank’s capital support. As Piraeus Bank announced after completing the stress test, the capital injection plan is worth EUR 1 billion and will be implemented half by internal actions and by the issuance of non – dilutive tools (ie issuing a Tier II bond of 500 million euro).

The issuance of the bond does not have a substantial deadline, as it depends on the climate in the markets and there will be no pressure from SSM to the Bank to proceed with issuance with failure standards, as confirmed by Chief Executive Officer of Piraeus Bank, Christos Megalou.

Citing Eurobyte, capital.gr writes that the level of 674 points is critical, as there are two equal ratios, and if approached, it will give a good response. However, the reaction may well be given directly from where we are, and that has the greatest chances. on the other hand, the first resistance is the nearby 682 units (fast voltage line), while 685 is a retest point of the upward that broke down yesterday and 689.

Some Greek media write that investors worry that Greek banks may not manage to raise the capital they need and therefore will be object of state support from the 30 billion euros stock of capital.”

Other reasons for the sell off of the Greek banks are reportedly “the double scenario in the Greek state Budget 2019, the debate on whether Greece will stick with its commitments towards the lenders,  and the prolonged pre-elections period that increase the “country risk.”

In addition come the “weak performances of the bank in the last 6 months and non-performing loans at the banks as well as the Italian turmoil and fears of contagion,” notes economic news website newmoney.gr.

Just on Monday, October 1 2018, Greece lifted the cap on cash withdrawals ending the second pillar of the capital controls imposed end of June 2015.