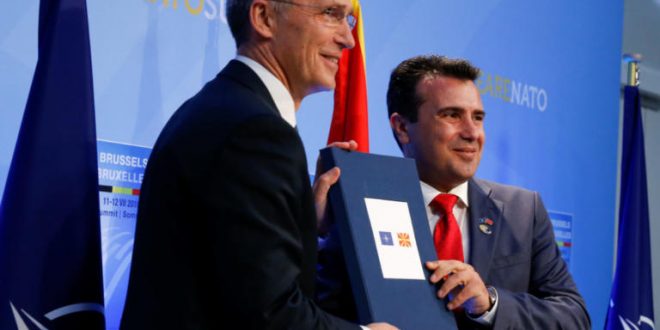 The invitation of North Macedonia’s accession to the NATO came just three days after Greek lawmakers ratified the Agreement.

The signature date for the accession protocol is be announced soon.

Speaking to Politico Playbook earlier on Monday Stoltenberg said “We will sign an accession protocol in NATO and we can do that within a short time.”

“The ratification will take some time, it depends on all 29 parliaments,” according to Stoltenberg. “Last time it took around a year,” he said, referring to Montenegro’s accession to the Alliance, which was completed in 2017. “As soon as we have signed the accession protocol, Skopje will start to sit at the table,” he added.

Greece has agreed to be the first to sign, which will activate the name change and pave the way for a process that will increase the alliance’s numbers to 30.

NATO is the first organization to make good on the West’s promise to bring the newly named country into the fold. The next opportunity for the EU to make a step toward Skopje will come this summer, when it is slated to review candidates for EU accession.

But when will FYROM start to officially use its new name “North Macedonia“?

Following the publication in the Official Gazette of the ratification of the Prespa Agreement Law – bearing the signature of the President of the Republic Prokopis Pavlopoulos – Athens will formally inform NATO and send the relevant document.
The 28 permanent representatives will sign the FYROM accession protocol under the name of Northern Macedonia. The NATO Secretariat will send the accession protocol to Athens. The Greek Parliament will be the first to ratify the Accession Protocol of North Macedonia (probably within the next ten days) to follow the other Alliance Parliament parliaments. No NATO member ally has any objection to FYROM’s new name – and many cannot understand what’s the Greek  fuzz about.
Nevertheless, before FYROM starting to use its new name, the way is quite long as several other international bodies like the UN will have to be informed and approve… unless Russia makes its threat true and veto the Prespes Agreement given its power to be one of the five permanent members of the UN Security Council.
Meanwhile, Tsipras and Zaev are reportedly officially nominees for the Nobel Peace prize 2019.