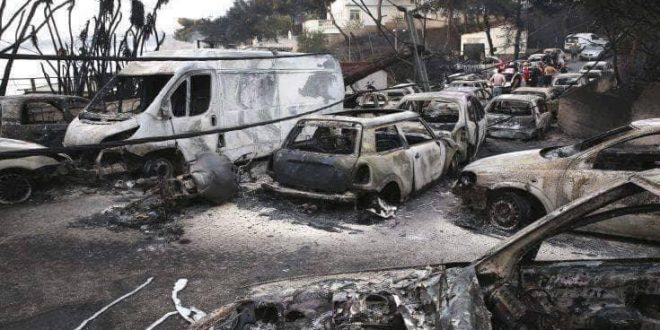 Lack of coordination and the broader deficiencies of the state mechanism in Fire protection have been pointed out in the report submitted by the Independent Committee for Wildfires management. The Committee was established to investigate the reason that led to the tragedy in July 2018 where 100 people died in the wildfires in Mati, East Attica.

The lack of coordination and the deficiencies are largely inconsistent between the funds allocated to the repression rather than the prevention.

Characteristically, the report points out that 45 state bodies are involved in the Wildfires Prevention and 17 bodies operate in the filed of fire extinguishing, however, there is no central coordination.

The Forestry Service that is normally is charge with the coordination, is unable to perform its full duties due to a legal vacuum.

The situation is a bit better in the 17 bodies in charge of fire extinguishing, however, they are subordinated to 6 different ministries and have 11 different competences.

The Committee notes that there is a complete lack of a single national protection plan, which will set the framework for the cooperation of all the actors involved. Apart from the absence of planning, however, the experts also record the “lack of cooperation spirit” between the services, especially between the Fire Service and the Forest Service.

The problems get more complicated due to wild city construction, inadequate care of forests and the absence of firewall plans at local level.

Analysts criticize Greece for its chronic emphasis on fire combat rather than prevention, saying there is a great “disharmony” between the funds allocated to these two units.

They add that the “multiple” investments over the last 20 years in the fire combat have not strengthened the effectiveness of the mechanism accordingly.

The report, however, makes it clear that gaps go beyond planning and funding and extend to the front lines of education and operational action.

Experts report that there is a lack of “professional” training of the personnel involved, which is accompanied by over-reliance on aerial firefighting. They also point out that the Fire Department applies in forest fires practices that are normally useful in urban fires.

The Committee call on the Greek state to tackle the problem of fires “through an integrated and coherent management framework” and “not with isolated and unrelated services and actions of prevention or repression”.

Scientific, counseling and coordination tasks should be assigned to an organization, they note, adding that this central-operator should be a data bank and be the “pacemaker” to tackle thoroughly fires in the forests and the countryside.

“Without such a mechanism, it will not be possible to attain either the continuous and substantial effort to prevent, nor the necessary climate and spirit of cooperation between the actors involved,” they conclude.

Several Greek scientists and researchers worked for the report of the Independent Committee for Wildfires Management under the leadership of Dr. Johann Georg Goldammer, senior scientist at the Max Planck Society specializing in forest research and director of the Global Fire Monitoring Center.

PS Reading this report, one can only confirm that the state keeps on operating in the old anachronistic way with thousand sin charge, no efficiency and where the right hand has absolute no idea what the left hand is up with. I don;t remember Greece’s lenders ever pushed to modernization of such services. Of course, they didn’t. They were only interested in modernization and efficiency to boost competitiveness.