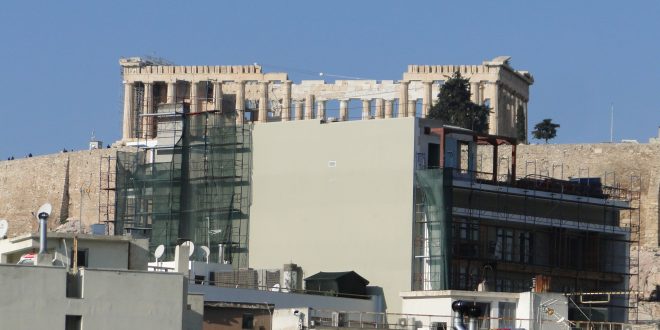 Investment at any price? A wall of hotels around Acropolis? Construction of a 10-story hotel at the foot of the Acropolis Hill is springing high, construction for a 9-story one is to start soon. Locals protest.

residents and civic societies are protesting the construction of a 10-story hotel building in front of the Acropolis Hill in Makriyianni district of Athens. “The construction offends the Parthenon and the Acropolis” protesters write in their Avaaz petition to cancel or at least lower the project.

In cooperation with the Hellenic Society for the Environment and Cultural Heritage and civil societies in the historical center of Athens, the petition calls on all competent authorities, the Ministry of Environment, the Ministry of Culture and the Municipality of Athens for the immediate suspension of all building permits and the immediate  legislation and implementation of new rules for Buildings and Urban Planning. 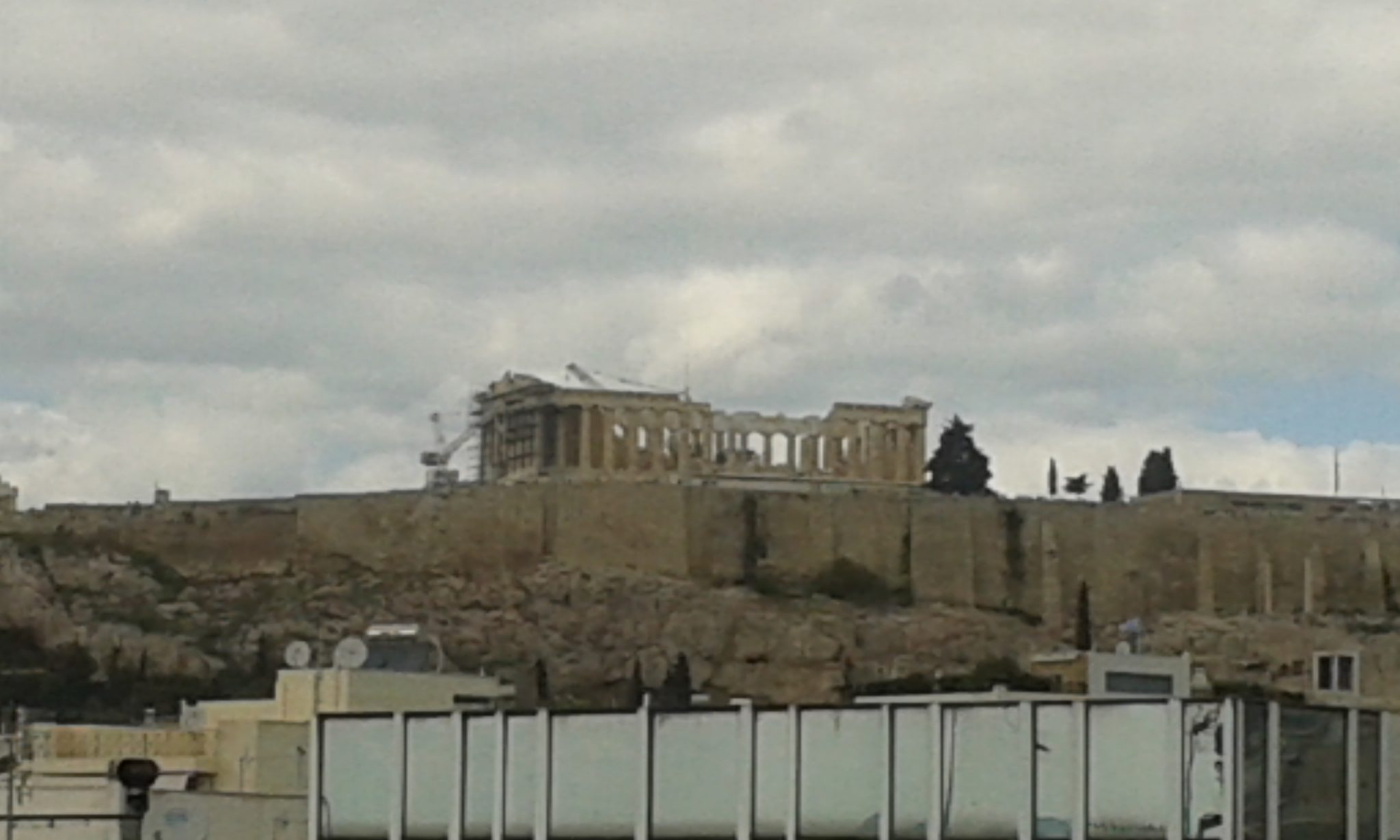 The picture shot by KTG on Sept 30, 2017, from the top of the Modern Arts Museum, former Fix Factory on Syggrou Avenue. 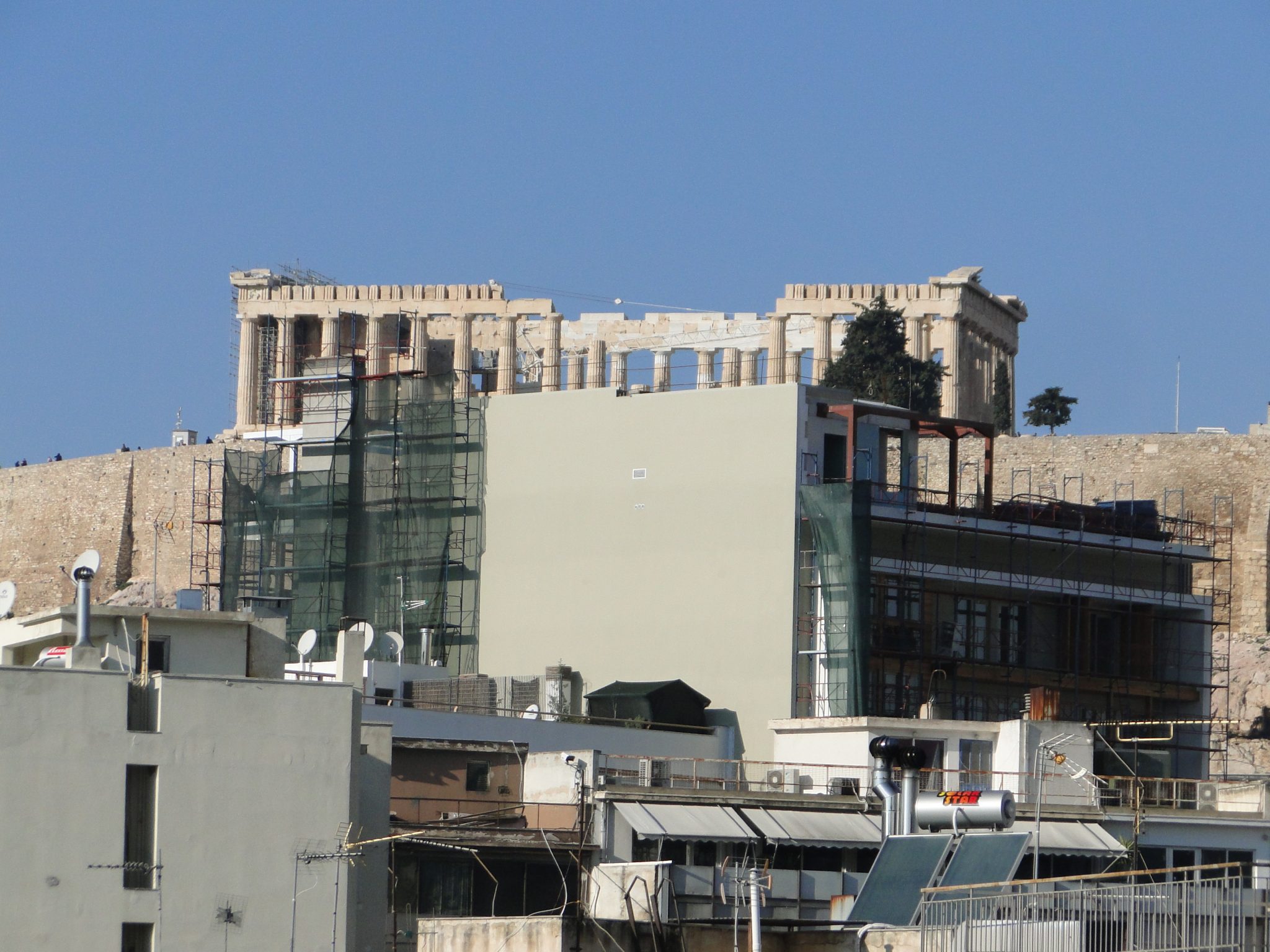 The massive 10-story hotel is 5,300 sq meters. In 2018, the Central Archaeological Council gave also the green light for a 9-story hotel in the area. Both hotels are very close to the Acropolis Museum.

The World Heritage Monument of the Acropolis, the urban environment and residential use need to be protected and the negative impacts of massive tourism need to be decreased, they write in their petition.

A sustainable urban development in the immediate environment of Acropolis is imminent, they stress.

In 2016 the neighborhood of Koukaki – Makriyanni, southbound of Acropolis , was claimed to be one of the top 16 tourist destinations worldwide. Reason enough for international and real estate investors to proceed with “the massive construction of new hotel buildings.”

“It is the absence of protective building regulations and appropriate urban planning measures in the area, that allowed the recent construction of 10-11 story hotel buildings,” the petition initiators note.

Responding to the residents’ protest, the Environment Ministry reportedly plans to set up a committee to investigate the issue and examine the possibility of lowering the building if its height ratio is above the other buildings in the area.

Based on the current rules, the average height of other buildings in the area is up to 6-7 floors with a maximum height of 21 meters.

How could the hotel get a permission to build 10 floors in such an area? In the years of economic crisis, Greece has come under immense pressure to bring investments in the country, with tourism being the most profitable and flourishing sector.

If no measures against the alternation of the area are implemented, a wall of massive hotels will soon be built at the foot of the Acropolis with dramatic consequences. 30-meter high hotels will spring among the residential buildings. The modern will mingle with the old, not necessarily in harmony. The walker in the broader area will not be able anymore to raise the head and get a glance of history. Not to mention the increase of the sound and environmental pollution, the excessive burden on traffic and infrastructure networks.

Never mind the trouble. The tourists will have secured an exclusive view at the Acropolis and the Parthenon…