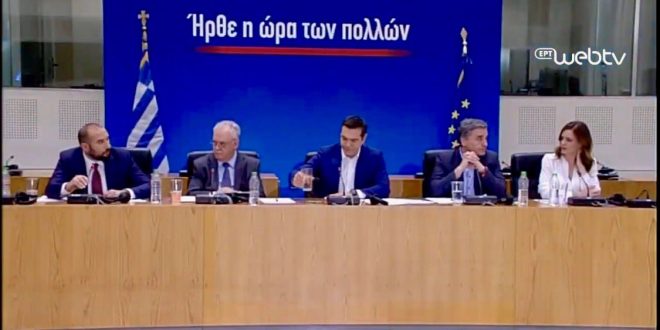 Prime Minister Alexis Tsipras announced a package of relief measures to relieve the life of debt-ridden Greek households. Among the measure for 2019 is the generous reduction of Value Added Tax in food items, catering industry, electricity and natural gas as well as the distribution of so-called 13th pension.

Value Added Tax in food items and catering industry will be reduced to 13% from 24% currently. For electricity and natural gas the V.A.T. will be reduced from 13% to 6%.

The 13th pension will be equivalent to Easter bonus, which is half of the monthly pension. However, there are other criteria and according to these pensioners of 500 euros will received it full, while those with over 501 euros will see just part of the extra pension, around 70%. For those receiving over 100 euros, the 13th pension will be just 30% of the full pension.

“The measures are permanent, will be legislated as soon as possible and will go in effect already in May,” Tsipras said at a press conference at Zappeion in Athens.

The money comes from the 1.1 billion primary surplus in 2019.

Tsipras revealed also a package of measure for 2020 that includes scrapping of solidarity levy for annual incomes up to 20,000 euros and reductions for incomes over 20,001, reductions in Unified Property Tax ENFIA for remote islands, tax relief for investing companies and others.

The package for 2020 will go into effect as of 1. January, provided, of course, that SYRIZA will win the parliamentary elections scheduled for autumn this year.

Tsipras said the country left a very tough adjustment period of eight years and has shown positive growth trends for the third year in a row.

“However, there is another large segment of Greek society that has carried a disproportionate burden and has not yet felt the positive results of the country’s exit from the memoranda (bailout agreements),” he said. The time has come for them to “taste of the fruit of their sacrifices,” Alexis Tsipras added.

The V.A.T. in food and catering services skyrocketed in summer 2015 following lenders’ orders. Recuding the VAT in food items, electricity and natural gas is indeed a measure that will affect all Greek households without exception.