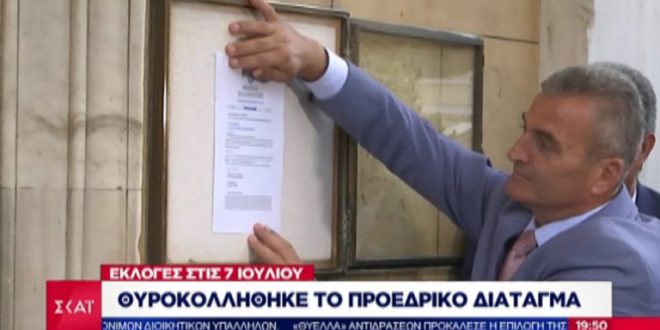 The Presidential decree for the dissolution of the Greek Parliament was posted at the entrance of the Parliament building short before 8 o’ clock on Tuesday evening, marking the end of the SYRIZA government.

The Presidential decree signed by President Prokopis Pavlopoulos formally opens the way for the early election on July 7, 2019.

The new lawmakers are expected to swear in on July 17.

Alexis Tsipras has called for the dissolution of the Parliament at a meeting with the President on Monday afternoon.

As reason for to early elections, Tsipras cited the fact that after the European elections a conditions of a prolonged pre-election period of about 4 months have been formed, thus may pose risks for the Greek economy.