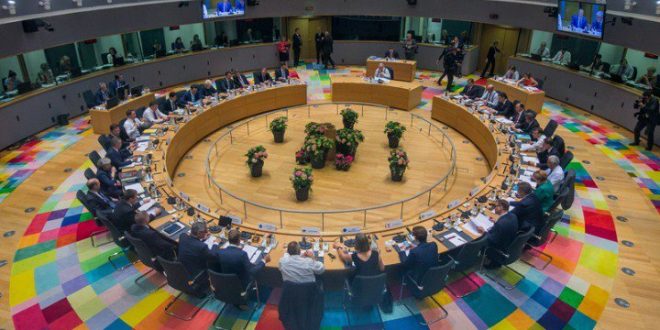 The 28 European leaders have threatened Turkey with sanctions if it continues its illegal actions in the Eastern Mediterranean and [interesting to note] in the Aegean Sea. In the Conclusions statement following the European Council Summit in Brussels,  the European leaders “strongly condemn” and express “serious concerns” about Turkey’s illegal actions in the Eastern Mediterranean and the Aegean Sea.  Furthermore they call on the European Commission and the EU’s Foreign & Security Policy Service EEAS to submit options for “appropriate” and “targeted measures.”

The European Council expresses serious concerns over Turkey’s current illegal drilling activities in the Eastern Mediterranean and deplores that Turkey has not yet responded to the EU’s repeated calls to cease such activities.

The European Council underlines the serious immediate negative impact that such illegal actions have across the range of EU-Turkey relations.

The European Council calls on Turkey to show restraint, respect the sovereign rights of Cyprus and refrain from any such actions.

The European Council endorses the invitation to the Commission and the EEAS to submit options for appropriate measures without delay, including targeted measures.

The EU will continue to closely monitor developments and stands ready to respond appropriately and in full solidarity with Cyprus. The European Council will remain seized of the matter and will revert accordingly.

It is not clear when and what the “appropriated and targeted measures” will be ready as the EU policies are notorious for their bureaucratic and delaying mechanisms.

However, European Commission President Jean-Claude Juncker warned Ankara that “the commission has been charged to propose measures to be taken as soon as possible and we’ll do so, and these will not be soft measures.”

“What Turkey is doing in the territorial waters of Cyprus is totally unacceptable,” Juncker told reporters after the summit in the early hours of Friday.

Nevertheless, Turkey as usually does not give a damn and earlier on the same day, Thursday, it deployed a second drilling vessel to Cyprus waters, the Yavuz.

Fact is that the joint offensive by Greece and Cyprus has brought results and finally something in moving in the right direction from Brussels to Ankara.