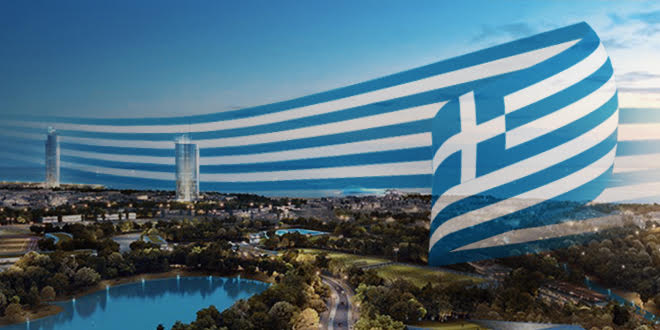 Supranational institutions such as the IMF and European Central Bank push forward the Hellenic Republic to follow through economic reforms and ensure international creditors that repayment of the national debt — the outcome of the financial crisis of 2007-08 reaching 181.1% of GDP in 2018 — is perpetually substantiated by incoming cash and prudent investments.

One of the important cogs in this monetary apparatus is the Hellinikon Project.

The infrastructural marvel on the location of former international airport closed in 2001 is conceived as a world-class metropolitan park and the joint capital venture to “improve the economy, provide employment opportunities, and promote Athens as a cultural metropolis.”

The 99-year lease of 620 hectares to Global Investment Group — intercontinental consortium made of Lamda Development (the leader in real estate retail sector in Greece, member of Latsis Group), Fosun Group from China (operator of the Club Med holiday business), and Eagle Hills Properties from Abu Dhabi (a private investment company) — has been approved by the Government in 2014.

Envisioned as an €8 billion investment estimated to create 10,000 permanent jobs (during the construction period) and more than 75,000 jobs in the mature phase, the Hellinikon Project is projected to boost national GDP by 2.4% once fully developed and draw a projected 1 million new tourists per year.

Amenities are to include hotels, luxury residences, the sports facilities complex, urban innovation and business center, shopping mall, the exhibition precinct, the marina, and the seafront area with the beach and the aquarium.

Among many generators of much-needed revenue and taxes, one compound stands apart — the Integrated Resort.

According to the investors’ plan, “the impressive high-rise structure will include a hotel and state-of-the-art Gaming and MICE [Ed. Note: Meetings, Incentives, Conferencing, Exhibitions] facilities, making it a world-class destination and important addition to the touristic product of the city.”

For years after the lease approval and an official kick-off of post-bailout agreement between Greece and its lenders, the Hellinikon Project remained plagued and delayed by bureaucracy, legislative lethargy, long-running public criticism (argued by environment damage and rich national cultural heritage), and twisting economic issues.

However, after a liberal-conservatives won parliamentary elections in July 2019 — on a pledge to spur the growth of the national economy, cut taxes, and speed up investments — the new government of Kyriakos Mitsotakis is resolute to turn the clock and get the Hellinikon Project  back on track.

Commenting on many postponements in the past, Development Minister Adonis Georgiadis outlined policy to “accelerate the licensing process so that Lamda can lease the property from the state and start construction.”

Right after the elections, the land use permits based on four crucial ministerial decisions — on project’s environmental impact, the metropolitan park planning and zoning, and the casino at the Integrated Resort — were to be issued by August 10, 2019, ending years of back and forth between investors and previous government, and effectively paving the way for construction to begin.

As of August 28, only two decisions have been signed, one of them addressing the Integrated Resort.

Consequentially, the new bidding deadline for interested operators to submit offers for the casino tender at the Hellinikon Project is set on September 30, 2019.

The flurry of governmental activity prompted mixed reactions from worldwide gambling and hospitality operators: one behemoth is legitimately looking to explore the opportunity and go toe-to-toe with the only official bidder thus far, as two potential competitors and powerhouses reportedly shift focus or lost interest after four postponed deadlines.

Making things even more interesting is legislative amendment (submitted in 2018) which stipulate that integrated casino licenses cover five-star resorts, require minimum up-front capital of €1 million and additional €10 million after five years, and — are valid for 30 years.

Therefore, the bidding winner of the Hellinikon casino RFP contest will enjoy in unrestricted gambling operations and, in a way, low competition level.

Currently, there are a handful of land-based casinos in Greece, located on the mainland (Loutraki, Thessaloniki, Mont Parnes, Xanthi, Halkidiki, Patras) and on the islands of Rhodes, Syros, and Corfu (with three additional planned on Crete, Mykonos, and Santorini).

As of July 4, only the later formally declared the intention to bid on the Hellinikon casino license, teaming up with local construction giant GEK Terna.

Announcing the MGE-Terna strategic partnership, leaders of both entities hailed the opportunity to compound “reliability, effectiveness and deep knowledge of the Greek market” through cooperation “with a leading international firm in the entertainment and gaming industry.”

Meanwhile, Caesars appears to shifted focus due to €15.6 billion merger with Eldorado Resorts, putting two rivals on the same page once and for all. Genting Berhad Group — Malaysian gaming and hospitality giant — reportedly lost interest in the Hellinikon mega-scheme due to multiple delays.

Formally entering the race in a manner of true industry behemoth, Hard Rock announced bidding to the Hellinikon Integrated Resort at a press briefing held in Athens on August 23.

Elaborating on their proposal, Chairman and CEO Jim Allen said that company sees this opportunity as “an overall investment in the hospitality sector,” which is to include a 1,000-room hotel, a conference center, restaurants, other leisure facilities, and a brand new casino.

According to Allen, they tinkered on the project for 18 months, and if awarded with the 30-year license, Hard Rock plans to invest over €1 billion in the Integrated Resort while the construction is projected to take 24-26 months.

As of now, both Mohegan Gaming and Entertainment (MGE) and Hard Rock International have been shortlisted as parties capable to deliver promises on building and operating, in effect, the first Integrated Resort Casino in Europe.

The final project is to host more than 500 slot machines and 100 gaming tables in addition to all amenities occupying approximately 15,000 square meters.

In the newest effort to refresh interest from other parties, at the beginning of September the Greek Ministry of Finance somewhat tweaked the bidding qualification, in addition to apparently extending the final deadline to October 4.

The latest reports indicate that Genting Malaysia is still jockeying for the rights, though nothing has been officially declared yet.

With a gross gambling turnover of €8.86 billion per year — gaming and betting, not including the lottery — Greece ranks 18th in the world, as of 2019, in the land-based gambling category, according to H2 Gambling Capital.

To compound this, Greece is ranked 25th (among 140 countries) in the World Economic Forum 2019 Travel and Tourism Competitiveness index published in August. Record-breaking 33 million people visited the country last year, generating a bit over €16 billion.

These two seemingly different yet quite intertwined prongs of economic prosperity may merge brilliantly in the Hellinikon Integrated Resort.

The architectural wonder has the potential to mix innovation and national culture with the opulence of gambling and international clientele enjoying in luxurious facilities.

Decades of experience on operators’ part, regardless of the bidding winner, should ensure the sustainable growth of operations and revenues.

The national taxation of land-based casinos in the range of 30-37% on turnover appears to offer a steady and much-needed cash-flow, in addition to the overall significance of the whole endeavor to employment opportunities and social stability.

Thus, after weathering quite a few storms in the past five years, the Hellinikon Project appears to look forward to a bit calmer future, at least for now.

In the end, in a way, the Greek proverb might put the whole endeavor and its history, as well the future, in the fitting context: