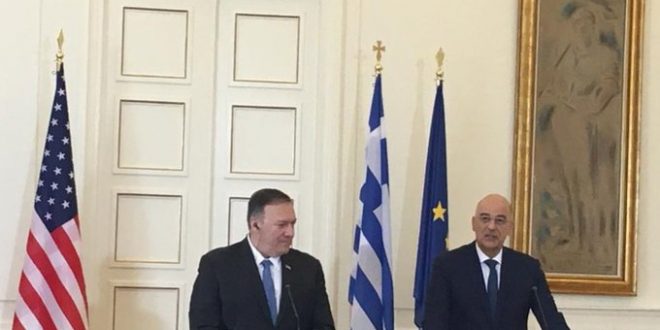 “There are limits, we cannot let anyone, Turkey, make illegal drilling,” US Secretary of state, Mike Pompeo, said during a joint press conference with his Greek counterpart, Nikos Dendias, on Saturday.

The Turkish provocation against Greece and Turkey were high on the agenda Athens put on the table during meetings with Pompeo on Saturday.

Both Prime Minister, Kyriakos Mitsotakis, and Foreign Minister, Nikos Dendias, called on Pompeo for the US contribution in order to put a “brake” to the provocative behavior of Ankara.

The US top diplomat apparently wanted to remain impartial on the issue, even when Mitsotakis confronted him with it in front of the cameras. The Greek PM said that Turkey’s recent activities in the plot 7 violate Cyprus’ sovereignty rights.” He added that the US are interested for the region and the only thing that Cyprus is asking for, is the respect to the International Law.

Pompeo did not comment when the Greek PM confronted him with the issue in front of journalists. However, he could not bypass a relevant question during the joint press conference with his Greek counterpart.

“You are talking about drilling in Cyprus. I will not tell you what I said to Kyriakos Mitsotakis, but I will tell you what America thinks about this matter, “Mike Pompeo said.

“We understand the dangers, we know the activities that are taking place, and we work very closely to ensure that these issues are not militarized but there is de-escalatation,” he said, adding “there are limits. We will not allow anyone, Turkey, illegal drilling.”

“As the United States, we have made it clear that actions in international waters are not acceptable if they are not conducted on the basis of international rules,” Pompeo said further.

“We have pointed out this to Turkey and will take diplomatic actions to ensure that there is no illegal action by any country dominated by the international law,”Pompeo added.

On his part, Nikos Dendias, said that Turkey must comply with international rules that define the relations of states.

He spoke of condemnation of abusive behaviors that undermine international legitimacy in the Eastern Mediterranean, as “Turkey violates international law and the European acquis.”

“The strategic upgrade of relations with the US is a security guarantee,” Dendias said among others.

So far there is no official reaction by Turkey on Pompeo’s statement. However, the Turkish press that closely follows his visit to Athens, reacted immediacy speaking of “scandalous statements.”

Turkey has sent its drilling vessel Yavuz to continue hydrocarbon exploration activities in the Eastern Mediterranean. The new well that Yavuz will drill is located on the Block 7 of Cyprus.