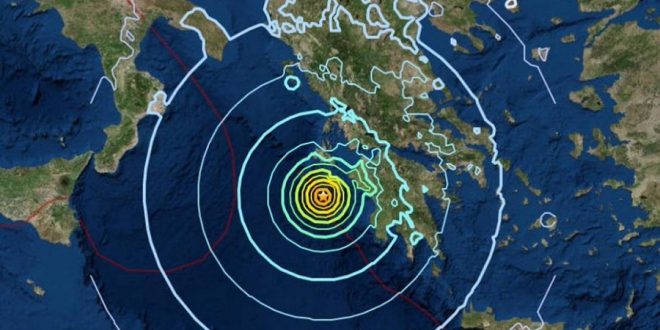 Two Earthquakes strike the island of Zakynthos in the Ionian Sea

October 12, 2019 Earthquake Comments Off on Two Earthquakes strike the island of Zakynthos in the Ionian Sea 1,649 Views

Two earthquakes measuring 4.4 and 4.3 on the Richter scale stroke the island of Zakynthos (Zante) on Saturday. The epicenter of both earthquakes was in the sea area South of the islands in the Ionian Sea.

According to seismologists, the two tremors are aftershocks of the 6.8 R that hit the island a year ago.

More than 20 aftershocks have been recorded since the 4.4 R in the early moring hours of Saturday. Their magnitude ranges between 1.5 – 2.8 Richter.

Speaking to tempo24.news, professor Akis Tselentis said that “there is a slight seismic activity in the Laganas Bay that is probably part of the post-seismic sequence of 4.4. excitement in the wider area.”

The seismographers of the Geodetic Institute of the National Observatory of Athens have recorded several tremors in the area, the three more poweful were felt both in Zakynthos and Ilia, in South-West Peloponnese.

Earthquake strikes with 4.1R Skiathos and the Sporades islands

An earthquake hit with magnitude of 4.1 on the Richter scale the Sporades islands a …