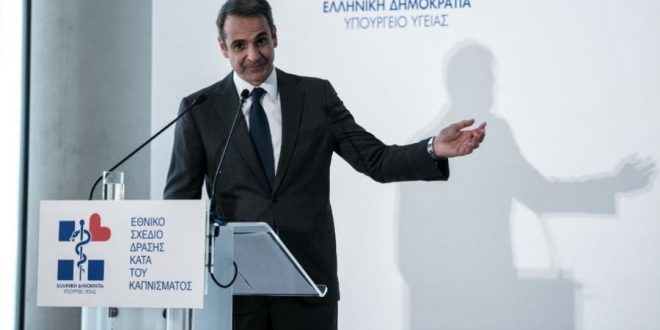 Greece has officially launched the Smoking Ban on Tuesday in a festive ceremony at the Niarchos Foundation Center. Prime Minister Kyriaskos Mitsotakis addressed the audience that had gathered to listen to the official presentation of the Health Ministry’s “National Action Plan Against Smoking.”

“The enemy is the tobacco smoke, not the smokers,” Mitsotakis said.

“The smoking ban is a bold initiative to protect public health. A symbolic move to modernize and refine our daily lives. But it is also an exercise in mutual respect that ultimately strengthens social cohesion,” he added.

He recounted the eleven acts of legislation, presidential decrees and ministerial decisions in 10 years, with zero results. This is the sad account of the indoor smoking ban, supposedly enacted in 2009, ” Mitsotakis said.

He noted that governments did not dare, administrations took no action and society tolerated the habit.

In order to scare the audience and the Greek smokers he said that smoking:

He added that one in six boys and one in eight girls at the age of 15 were smokers, while 94.6 pct of the population were exposed to passive smoking in one way or another.

Among others, he said that he wants to establish a “non-smoking culture” in Greece and if the smoking ban was successful in Europe it can be here too.

He then spoke about the fines ranging from 100 to 10,000 euros and a hot line to denounce those violating the Law. Measures aiming to democratically enforce this new culture in the country.

Anyway, in his unusual long speech, the Prime Minister seemed to have forgotten mentioning the accompanying “anti-smoking campaign” – obviously because Greeks have not seen any so far.

No, there was no red button in front of him so that he could press it and extinguish smokers once for all.