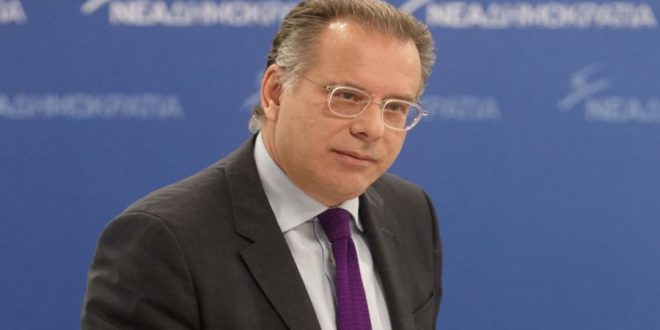 Alt Migration Minister: “NGOs-Leeches set up over night to get EU funding”

February 5, 2020 Greece Comments Off on Alt Migration Minister: “NGOs-Leeches set up over night to get EU funding” 982 Views

Τhe Greek conservative government found a “scapegoat” for the Migration Crisis: the NGOs dealing with refugees and asylum seekers. Alternate Migration Minister, Giorgos Koumoutsakos, went to far to describe them as “leeches” that were “set up in one night in order to have access to EU funding.”

Speaking at the Parliament debate before the voting to the amendment increasing control over Greek and foreign NGOs, Koumoutsakos spoke of “networks consisting of NGOs, doctors and lawyers.”

“When we took over, a net of interests had been formed around immigration due to the large slowdown in the ineffective asylum application process. This led to 80% of applicants being considered as vulnerable. Doctors, lawyers, NGOs are involved in this network. This whole network has been rooted for five years in managing the misery of the people who came to the country, This network that acted like leeches was very well-established,” he said.

In an interview withe Thema FM, he went further to accuse NGO for cooperating with human traffickers.

“When a boat arrives on a rocky shore of Levsos and the port authorities go there, they find 3-4 people in yellow and orange vests who when asked ‘what are you doing here?’ they respond tha they clean the beaches,” he said describing a specific incident.

He added that “there are good reasons to be skeptical.”

He stressed  that “the dark roots of this interest networks must be brought to light.”

Asked the statements of Migration Minister Notis Mitarakis, that the incidents on Lesvos on Tuesday were “possibly incited”, Koumoutsakos reiterated the government narrative of “coincidence.”

“There is a temporal coincidence of the declared willingness to enter this dark network [NGOs amendment] and the uproar on Lesvos. I am not saying that in difficult situations there are no causes that lead to these images but one cannot ignore the timely coincidence,” he said.

Koumoutsakos allegations are serious, however, the government has yet to bring evidence to support its position.

True is that a network providing “vulnerability certificates” was discovered last summer on Samos. True is also that members of NGOs welcome or rescue – depends on how one approaches the issue – the boats arriving from Turkey.

But putting all NGOs in one bag and shake it, shedding “grey light” to all is certainly not fair. It is probably also not fair to the NGOs run by a few government officials or their relatives, as it has been massively posted on social media in the last few days.

Without the NGOs, the living conditions in the overcrowded hot spots would be beyond human words.

What did the government do to solve or the problem other than underestimating it in the first months it took the power over?

Anyway, the amendment that requires the NGOs registration including the employees’ names have passed with the votes of New Democracy. Main opposition SYRIZA abstained with a “present” vote, while all other opposition parties KINAL, Communist Party of Greece (KKE), Elliniki Lysi and MeRA25 voted against it.

Worth noting that the NGO registry exists since 2016. ND had only to re-implement/re-activate it, call it whatever you want. It did not need a new law.

The New Democracy narrative has been adopted by the majority of the mainstream media that use garnished with populist rhetoric. “Some NGOs employees earn over 3,000 euros per month,” a reported at a private broadcaster said tonight.