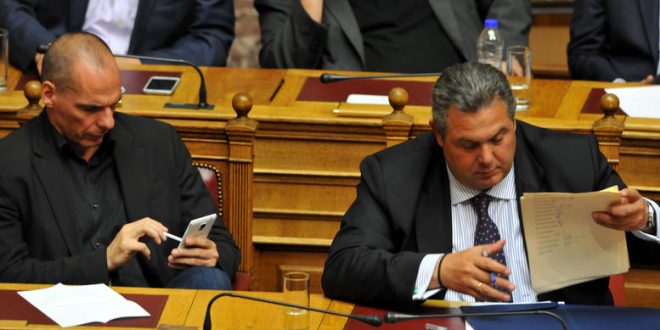 “Varoufakis had agreed with Schaeuble, €80bn for Grexit” says Kammenos

Former coalition partner of the SYRIZA government has claimed that ex Φinance Minister Yanis Varoufakis had agreed with German counterpart Wolfgang Schaeuble on Grexit. “Greece would receive 80 billion euros and leave the eurozone,” Panos Kammenos said on Monday night in an interview with ANT1 TV.

“Varoufakis had agreed with Schaueble to take 80 billion and leave the eurozone,” Kammenos said. he added that “Varoufakis wanted to stay in the eurozone only in the movies.”

“He followed the Schaeuble line,” Kammenos added about his former government partner.

” What you call [third] memorandum was the agreement that saved Greece, it was the ultimate agreement and fortunately we achieved it with the help of the Americans and the involvement of the French ” Kammenos said.

“After that Tsipras and I said that we should get a new mandate and so we went to snap elections. There the people decided to allow us to continue ruling.”

Varoufakis responded to Kammenos allegations calling him a “branded slanderer.”

“Kammenos is a branded slanderer,” Varoufakis told Real FM on Tuesday morning adding that all he had to say about that period, he has said.

“I never refuse to talk about 2015. I admit I made mistakes but at the same time I’m proud of my attitude when I argued with the Troika, the “euro-supporters” and the “drachmistas,” the former finance minister stressed.